This proposal for a concrete chapel by Joaquim Portela Arquitetos is designed to reach up towards the sky from its site in the Swiss Alps (+ slideshow).

A large skylight set into the top of the angular outcrop is intended to flood the interior of the small Catholic chapel with natural light.

Porto-based Joaquim Portela Arquitetos, which has plans to build the chapel in the next year, wanted to help integrate the building with the landscape. It proposed leaving the building's board-marked concrete structure exposed so its tones can resonate with the rocky site, which is surrounded by trees.

"The search of the light is the concept behind the volume form," said studio founder Joaquim Portela. "The interior space of the chapel was created to be closed to the landscape, becoming an introspection space."

"In opposite, the sacristy opens up to the landscape creating not only a meditation room, but also a contemplation space," he added. 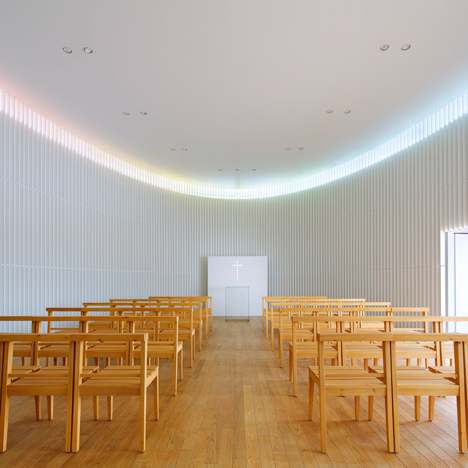 The concrete walls will be left bare throughout the interior, which will be furnished with simple wooden pews and illuminated by the large skylight above a marble altar.

A freestanding crucifix and slender candlestick holder are shown standing to one side of the altar.

A small wood-lined study branches away from the congregation area and features a glazed wall overlooking the the mountainside.

The chapel is similar in form to a concrete funeral home completed by Salas Architecture + Design in Spain.

Like the chapel, one end of funeral home angles up towards the sky to funnelling light into a waiting room for mourners, while other areas of the building are largely windowless.