A collage by American artist Beeple has become the most expensive digital image ever, with the blockchain-verified artwork fetching over $69 million at auction.

The artwork, titled Everydays: The First 5000 Days, was listed by Christie's on February 25 for only $100, becoming the first purely digital artwork backed by a non-fungible token (NFT) to be put under the hammer by a major auction house.

An NFT is a blockchain-based certificate of authenticity that can be assigned to virtual artworks to verify their origin and ownership.

As the artwork shot up to $69,346,250 on the final day, some 22 million people tuned in to follow the final minutes of the auction on Christie's website.

The widespread interest has been buoyed by a recent boom in crypto art, or what Wired is calling an "NFT gold rush" not unlike the Bitcoin bubble.

"The beginning of the next chapter in art history"

The advent of NFTs has made it possible for original digital artworks, which can be very easily duplicated, to be sold, collected and traded for profit just like physical art. 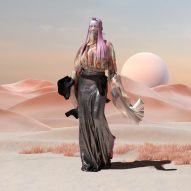 "Artists have been using hardware and software to create artwork and distribute it on the internet for the last 20 plus years but there was never a real way to truly own and collect it," said Beeple, whose real name is Mike Winkelmann.

"With NFTs that has now changed. I believe we are witnessing the beginning of the next chapter in art history, digital art."

Winkelmann has been posting a digital artwork on his Instagram every day since May of 2007, during which time his account has garnered almost 2 million followers. The record-breaking artwork Everydays: The First 5000 Days is a collage of his daily digital creations spanning more than 13 years.

The artist sold his first two NFT-backed artworks in October 2020, fetching $66,666 each. Only a few months later in February 2021, one of these artworks was resold on crypto art marketplace Nifty Gateway for a hundred times as much, earning the owner $6.6 million.

Any digital artefact can be authenticated via an NFT

The recent explosion of interest in NFTs isn't limited to the art world, as any digital artefact can be assigned an NFT to verify its authenticity and subsequently sold.

Twitter founder Jack Dorsey is even auctioning off his first-ever Tweet, which is expected to fetch upwards of $2.5 million.

In the world of design, virtual fashion designers were among the earliest NFT adopters. Digital fashion house The Fabricant made history back in 2019 when it auctioned off a digital dress for the first time, which fetched $9,500.

A number of 3D artists, who became popular on Instagram for their otherworldly renderings, have also started monetising their work as crypto art, with Barcelona-based Andrés Reisinger putting ten pieces of virtual furniture under the hammer last month, which sold for almost $450,000 in total.

NFTs can have use beyond being collected

Items such as virtual furniture or fashion can be integrated into animations and CGI movies or used in open-world games such as Minecraft, while The Fabricant's Iridescence dress can simply be superimposed on an image of the buyer to create the impression that they are wearing the garment.

The Fabricant founder Amber Jae Slooten has even argued that virtual fashion can offer a more sustainable alternative to fast fashion, as it is not made from finite material resources, generates no waste and does not need to be shipped around the world.

But experts are increasingly raising concerns about the environmental impact associated with the blockchain technology that enables NFTs to be verified.

In most cases, this is Ethereum – the blockchain network behind the world's second-largest cryptocurrency Ether – which has an annual carbon footprint of more than 12 million metric tons. This is equivalent to all of Panama's yearly emissions.