Tequila brand Jose Cuervo has opened a metaverse distillery designed by Mexico-based Rojkind Arquitectos and British designers Bompas & Parr, where attractions include a barrel maze and a pool party.

Located on the Decentraland platform, the Jose Cuervo Metadistillery is an experience centre that invites customers to come and interact with the brand in ways that wouldn't be possible in the physical world.

Rojkind has designed a huge virtual building that is modelled on the roots of the agave plant – a key ingredient in the making of tequila.

Experience design specialists Bompas & Parr have meanwhile developed a series of gaming challenges for users to complete as they move through the building.

Rojkind's architectural design takes advantage of the freedom offered by the metaverse, where planning regulations, engineering challenges and material costs are no longer an issue.

The structure is designed to physically embody the identity and values of the brand.

The agave-fibre facade gives it an outwardly curving shape, while the interior appears to be formed of floating platforms.

"The structure's form was inspired by the roots of the agave, a plant nucleus that, when observed, evokes feelings of protection and consolidation," said the Mexico City-based studio.

"In this instance, the Jose Cuervo Metadistillery aspires to be the centre around which all individuals can forge stronger bonds, building an inclusive community." 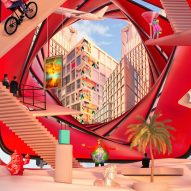 CitizenM to become "first hospitality company to build in the metaverse"

Inside, spaces are designed around the "tequila-based tasks" developed by Bompas & Parr, which take visitors through the entire process of making Jose Cuervo's tequila.

First up is the Cuervo Discovery Garden, where users are required to nurture a virtual garden of agave plants and harvest the fully grown piñas.

At the Piña Pool Party, users must play a game of volleyball in order to pop the fermentation bubbles that give the tequila flavour. After that, they have to navigate the Barrel Maze to collect droplets of barrel-aged tequila.

A crystal filter can be found in the fourth space. Then finally, visitors must complete a treasure hunt to find all the ingredients needed to make a virtual cocktail, which they can enjoy with other users in the La Familia bar.

"[We] developed an interactive, abstracted version of the La Rojeña distillery in Mexico," said Bompas & Parr, which is led by designers Sam Bompas and Harry Parr.

"In Decentraland, almost anything is possible, enabling [us] to play with the laws of physics in order to create the experience."

Those who completed all the challenges were rewarded with a digital wearable for their avatar.

“Cuervo is no stranger to bringing tequila to places it's never gone before," said Lander Otegui, senior vice president of marketing at Proximo Spirits, the international distributor for Jose Cuervo.

"We were given the first license to distil in Tequila, Jalisco, where the Cuervo family created the national spirit over 260 years ago, and still produces it today in Latin America's oldest distillery," he said.

"It's time for Cuervo to take on a new frontier and bring tequila to new audiences by opening the first-ever distillery in the metaverse."

The Jose Cuervo Metadistillery officially opened on 24 July, which is National Tequila Day in the US. It had almost 2,000 visitors in the first 48 hours, with users staying for an average of 16 minutes.

Other buildings to open in the metaverse include a virtual office for Vice Media Group, designed by BIG, and a series of designer properties operated by the exclusively virtual real estate company The Row.