Architecture studio Anna and Eugeni Bach has designed Seven Lives, an apartment block in Barcelona that references its surroundings but has been given a playful modern touch with vibrant balconies and an adaptable layout.

The building was designed by the Barcelona-based studio to conserve and capture the essence of the neighbourhood, while also adding a contemporary look.

Located in the old centre of the Horta neighbourhood in Barcelona, the three-storey terraced building was built on a small infill plot and contains three apartments, one on each floor. Each apartment measures 40 square metres.

Anna and Eugeni Bach took cues from the surrounding buildings and their common characteristics to design the exterior, which incorporates balconies, blinds, stucco and baseboards in a similar style to others in the neighbourhood.

The apartment block was designed to adhere to the area's building regulations, which specified what materials and colours could be used.

While the exterior is a grey-beige stucco informed by other nearby houses, the studio paired it with external frames and features painted a bright yellow that add a pop of colour to the facade.

"The regulations of this area specified a range of colours and materials," studio founders Anna and Eugeni Bach told Dezeen.

"Yellow appeared in the catalogue, as it is used in other buildings in the area, and we combined it with a grey-greenish colour of the facade, which is a colour that we can also easily find around and which makes a good contrast with the yellow.”

A "lost" balcony on the roof terrace, which exists without a room behind it, aims to soften the height difference between the house and the adjoined building and help tie the design in with the street.

"It was just about following the 'rules' of the street in terms of materials, proportions, balconies and shades," the studio said.

"We just evolved the design in a way that we did what had already been done in the neighbourhood, but with a slight touch of delicacy in the balconies, shades, and frames, which gives a contemporary touch to a very common facade."

The studio named the building Seven Lives in reference to the interior, which it says can be organised in seven different ways. 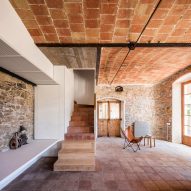 Apartments are organised around a central space that contains kitchens, bathrooms and a shared staircase leading to the upper-level residences.

Two equal-size rooms flank the central spaces and face either the street or the house's interior patio. These can be used either as bedrooms or living spaces.

"There are just three small apartments which have been designed with a certain idea of indeterminacy," the studio said.

"In this sense, the different spaces next to the facades are all equal so that they can as well host a bedroom, a living room, or a studio depending on the user."

"Summing up all of the different combinations, there are seven ways of living in these three houses, seven lives, like seven windows," the studio said.

Each apartment also has access to an exterior space – the ground-floor is adjoined by a patio, while the upper levels have access to a roof terrace that is split in two.

Anna and Eugeni Bach was founded in 1999, the studio works across urban planning, architecture, interior and object design.

Other infill projects include this former garage that is clad in Corten-steel clad home in Utrecht by Zecc Architecten, and this infill extension with a perforated bronze facade by Atelier Dau.