Danish architect and developer Tommy Rand has built a house for himself and his family in Denmark, featuring a spiral staircase made from 630 pieces of CNC-cut plywood.

Located on the outskirts of Aarhus, the two-storey house was designed with minimalism in mind. It comprises five rectilinear blocks of different sizes and proportions, arranged together in a cluster.

One of the most distinctive features of the house is the way it contrasts two main colours: the grey of both cast concrete and Norwegian slate, which form the walls and floors, and the golden brown of wooden elements dotted through the interior.

The spiral staircase is the best example of this; its curved sculptural form offers a striking contrast to the bare concrete walls that surround it.

This contrast draws attention to the intricacy of the design – all 630 pieces of computer-cut plywood were pieced together and glued on site, by hand, for ultimate precision.

"It is very beautiful from all angles," said Rand. "It is like a snail house, which opens up more and more as you go up to the first floor."

The house acts as a business showcase for Rand, who runs the property development company Markholt & Rand. But that wasn't the reason he decided to embark on the project. 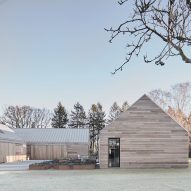 In 2018, he was involved in a motorcycle accident that left him a wheelchair for four months, followed by a long period of rehabilitation. This near-death experience prompted Rand to realise his life-long dream, to design and build a house of his own.

Rand spent much of his recovery period developing his self-build design. He was inspired by a memory of an old house he had seen, which stood apart from its neighbours on a picturesque site.

"I could only sit up for one hour at a time due to the injuries from the accident, which gave me some good thinking time," he told Dezeen. "So all the details of the house are carefully considered."

"My vision was to create something new and modern, which did not look like other houses," he explained.

One of the most important aspects of the design was to maintain a consistent style throughout the building, with attention to detail in every feature.

Not only did Rand design the building, he also designed most of the furnishings, which were custom made in oak by a local cabinet maker.

These details match with oak-framed windows and doors. There are also oak slats covering ceilings throughout the house, concealing lighting, ventilation and audio fixtures.

"I love the combination of concrete and wood," said Rand. "It gives the house a rawness and softness at the same time."

The layout is defined by the volumes of the building. On the ground floor, the five boxes accommodate a living room, a kitchen and dining space, the stairwell, a garage, and a suite containing two children's bedrooms, an office and a bathroom.

Only two of the boxes continue upstairs. The spiral staircase provides access to the main bedroom and en-suite, located directly above the kitchen. There's also a roof terrace, located above the living room.

Many spaces have been designed so that interior and exterior match. For instance, the slate flooring continues out onto the patio.

Both the ground floor terrace and the roof are west-facing, so that Rand and his family can enjoy the evening sun.

"The most important lesson I learned during this process was not to compromise on design and materials," Rand concludes. "I did not, and it is a great satisfaction every day when I am in the house."

Other recent Danish houses on Dezeen include a reinterpretation of Danish barn as cedar-clad home by Christoffersen Welling Architects and a tranquil home for head of Danish furniture brand Fredericia.

Photography is by Mia Mortensen.