The project, called S-M-L Loft, is located in a cast-iron building dating from 1880 in the city's Soho district.

One side encompasses a living room, dining room and kitchen, while the other holds the main suite, two guest rooms and a den.

Drawing upon the building's industrial history as a warehouse, the team created a trio of enclosures wrapped in an operable, metal cladding system. Their varying sizes inspired the project's name, which stands for Small, Medium and Large.

"These volumes float within the otherwise pure geometry of the floor plan, straddling the original line of cast-iron columns and exposed timber beam, and generating a visual contrast of new against old," said Brooklyn firm BC—OA, which stands for Breitner Ciaccia—Office of Architecture.

These volumes are designed to "conceal the ordinary functions of domestic life," the team said. One marks the unit's entryway, while another conceals the refrigerator and storage spaces within the kitchen.

A third volume, which stretches along a wall in the public area, contains a series of compartmentalised spaces – an office, bookshelves, a powder room, laundry facilities and a closet. It also holds the entrance to the unit's egress stair. 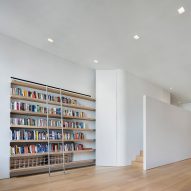 The designers put great care into selecting the cladding material, as the volumes were designed to be a standout feature in the apartment. The panels were treated to create a rusted finish and then were sealed.

"Extensive digital and physical studies investigating various combinations of wood, glass and metal were performed," the studio said. "In the end, a perforated, patinated steel sheet assembly was selected for both its hard and soft qualities."

The metal panels, described as having a suede-like appearance, are affixed to a steel frame. Some panels are operable, with others are fixed.

"Panel pulls are concealed in an edge reveal, intentionally causing each of the objects to read as militantly standardised and concealing their highly specific interiors," the team said.

The remainder of the loft is finished in a mix of natural and industrial materials.

Fuschia paint was scraped off original cast-iron columns, and brick party walls were revealed and sealed. A raw, timber beam was also exposed and set within a ceiling cutout, which emphasises its presence.

The floors consist of white oak, live-sawn boards that are 15 to 18 inches wide (38 to 46 centimetres). In the bathroom, solid walnut millwork is paired with raw concrete panels and white porcelain tiles.

Throughout the unit, indirect lighting creates an atmosphere that is bright but not harsh.

BC—OA is a Brooklyn-based architectural firm, founded in 2010.

Other renovated apartments in Soho include an airy space by architect Julian King that features a sleeping mezzanine and a bookcase with a rolling ladder, and a converted loft by architect Ali Tayar that uses prefabricated panels based on a 1960s Swiss modular housing system.

Photography is by Amy Barkow.