New York-based Snarkitecture has designed more than 10 different stores for Kith, but this is the largest so far, and the brand's first standalone store in Europe.

The fit out was designed to be true to the urban New York style that Kith is known for, but to also respect the building's unique history.

Originally built in the late 1800s as a private residence, it was bought by the American Legion in 1928 to serve as headquarters for American general John J Pershing. It was later used as an officer's club, before being converted into a five-star hotel.

Snarkitecture's approach was to combine contemporary forms and graphics with traditional materials and proportions.

"Much of the design was inspired by the history and existing condition of Pershing Hall," said the studio, which is led by artist Daniel Arsham. "However, it was important to balance those elements with a contemporary retail experience."

"In order to reference the historical context of the space, we introduced new techniques and materials to the Kith retail aesthetic, including walnut wainscotting, moulding and Venetian plaster."

The most eye-catching of the new additions are the two ceiling installations made from Nike sneaker casts.

While these installations are a common feature in Kith's stores, here they are designed to replicate historic elements – a barrel-vaulted ceiling and a teardrop chandelier.

"The overhead installation at the entrance offers a visually impactful initial moment and hints at what's to come inside the space," said Snarkitecture. 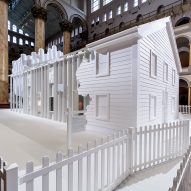 "The scale and location of the central staircase provided another opportunity to introduce the cast shoe motif, while creating an iconic moment inside the store," it continued.

Both installations are created from casts of Nike Air Max 1, a design connected to Paris because it was partially inspired by the Centre Pompidou.

"Finding the right sneaker to cast is always somewhat tricky," said the design team. "We worked closely with Ronnie Feig, owner and founder of Kith, to select the shoe model, material, texture and even the lacing method."

Pershing Hall's redevelopment was spearheaded by real-estate investor MARK. Kith has taken three floors of the building, while the upper floors will be used as offices.

Key spaces on Kith's floors include the glass-roofed courtyard, which has become a Sadelle's bar and restaurant, which features a green wall by French botanist Patrick Blanc.

Snarkitecture also updated some of the building's existing architectural details, for instance, the cast-iron balustrade now incorporates the Kith logo.

Showroom spaces are organised around the courtyard. They include a Treats cereal bar, a lounge space furnished with blue velvet seats, and retail galleries fitted with geometric brass hanging rails.

Meanwhile, the basement floor features a room designed to look like an aircraft interior.

"We want people to feel a sense of wonder and discovery as they progress through the different store environments, each with their own curated moments," added the designers.

"We hope that people working at Kith enjoy the space – it should feel like a welcoming home for everyone."

Other Kith stores featured on Dezeen include venues in West Hollywood, Miami and Brooklyn.