Located in a former warehouse on a corner in Miami's Wynwood neighbourhood, the store is a flagship for Billionaire Boys Club (BBC), which was founded in 2003 and includes sub-brands Icecream, Bee Line and Billionaire Girls Club.

"I'm very grateful that we have the opportunity to bring our flagship store to Miami," said Williams. "It's going to be a place where people can come in to get inspired by the mix of fashion, culture, art and design."

The 5,000-square-foot (465 metres) store includes retail space as well as art installations created for the store by Snarkitecture.

In order to light up the warehouse space, the studio added windows to the side of the structure and created a domed entryway, also with panelled windows.

The exterior of the store is clad in a light plaster material and the walls feature decorative murals.

Inside, the designers used influences from Florida's Everglades National Park as well as brand imagery from BBC to create an open space for the retail experience.

"The space is a reimagination of the traditional retail model, taking the form of an art gallery, with the goal to drive social engagement and exploration," the clothing brand said.

Wooden panels with a beige hue clad the walls of the store, creating a solid base element to contrast the colourful retail elements – such as the white and seafoam green cages that hold the merchandise.

According to BBC, many of the elements used for the interiors were reused.

"The design makes use of environmentally-friendly materials, such as recycled plastics, glass and wood panels," it said.

The ceiling is covered with white slats that are top-lit between the exposed HVAC elements.

"The store also features a spacious open-concept layout that was designed to meet BBC's need for a flexible retail environment," said the brand.

"Now, more than ever, we believe that curating brand physical experiences via brick-and-mortar shopping locations and in-store experiences are imperative to connect on a deeper level with our customers,” said BBC chief sales officer Matt Kaden.

Glass elements with stainless-steel accents line the walls of the store, creating space for smaller items to be displayed.

In the centre is a large blue-painted astronaut statue – the symbol of the brand as well as a nod to Florida's space-faring history. 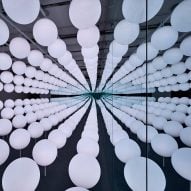 Miami's Wynwood neighbourhood was chosen for the store as it has become the epicentre of the city's art, fashion and design scenes.

"The choice of Wynwood, Miami for the new storefront is a conscious move to be in the heart of the art community and within a cultural environment that speaks to the brand's values and inspirations," said BBC general manager Loic Villepontoux.

Other stores in the area include a showroom for Mexican stone company Grupo Arca designed by Mexico-based Esrawe Studio in collaboration with art collective Superflex.

Other projects by Snarkitecture – a studio founded by Alex Mustonen and Daniel Arsham – include a "self-care" club in Washington DC and a Parisian mansion-turned-streetwear-outlet that includes a Nike Air Max chandelier.

The photography is by Billionaire Boys Club.