Dezeen teamed up with MAAT on a live talk to mark the opening of its spring exhibition programme.

The talk was part of the Lisbon-based Museum of Art, Architecture and Technology's (MAAT) event Open/Closed Systems, a day of virtual talks and performances presented live from Lisbon to celebrate the museum's new season of shows.

Dezeen readers can catch the rest of the event live from MAAT's Youtube channel.

Focusing on two upcoming exhibitions, X is Not a Small Country curated by Chen and Muzi, and Aquaria, curated by Rui, the panel discussed the topics explored in the shows and the role of museums in exploring issues concerning humanity's collective future.

X is Not a Small Country, running at MAAT until 6 September 2021, explores our current post-global condition by observing the processes of de-globalisation and geopolitical realignment that have been accelerated and distorted during the pandemic.

Aquaria, the other exhibition to feature in MAAT's spring programme, reflects on the challenges we could face when re-thinking our relationship with the marine world.

The exhibition includes a special collaboration with TBA21–Academy, which has pioneered research and engagement programmes on the ocean and its vulnerabilities.

Chen is an independent curator and writer based in Shanghai, where he works as the Director of the Curatorial Lab at the College of Design and Innovation at Tongji University.

He is also the Curatorial Director for Design Miami and was recently named general and artistic director of Rotterdam's Het Nieuwe Instituut. 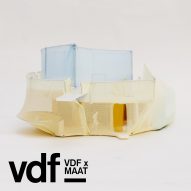 Muzi is a designer and curator based in Italy and the Netherlands.  She is the curator of the exhibition platform Geo-Design at Design Academy Eindhoven.

Rui is an Italian curator and researcher based in Milan, and is currently teaching a course on the Pedagogies of the Sea at Design Academy Eindhoven.

This talk was produced by Dezeen for MAAT as part of a partnership. Find out more about Dezeen's partnership content here.