The 32,500-square-metre performing arts institution next to the Hai River in Tianjin is the branch campus of the Juilliard School in New York, which Diller Scofidio + Renfro also created.

Like its US counterpart, the Tianjin Juilliard School has a mix of performance and teaching spaces, alongside communal areas and large portions of glazing that offer glimpses inside.

"Our design for the new Tianjin Juilliard School takes much of its DNA from Juilliard's New York campus, which we completed in 2009," said Charles Renfro, the studio's partner-in-charge.

"Both projects seek to increase engagement with the public through openness and transparency; offer informal spaces for students to mix and gather, and provide teaching and performance spaces with world-class acoustics."

The four pavilions that make up the Tianjin Juilliard School contain a 690-seat concert hall, a 299-seat recital hall and a 225-seat black box theatre, alongside offices and rehearsal spaces.

They are linked together by the five glass bridges, which span a 2,260-square-metre, column-free foyer at the heart of the building.

Externally, these pavilions read as one building, unified by their stainless steel, glass-fibre-reinforced concrete and Parklex wood cladding, and large areas of glazing.

Continuous stone paving and reflective pools wrap around the building to create a large external plaza for the public. The paving continues into the lobby to draw visitors inside.

Tianjin Juilliard School's primary performance facility is its 690-seat concert hall, which has a reconfigurable stage and is lined with warm eucalyptus wood.

The seats enfold the stage to create "a more intimate relationship between the audience and performers''. A glass facade with retractable blackout blinds features at one end and frames views of the river.

The black box theatre is primarily used for multimedia performances, while the recital hall is described as the school's "acoustic workhorse" – used throughout the day by students.

Like the concert hall, the recital hall is also wrapped in eucalyptus wood and has a glass facade that frames a nearby park and the reflecting pools on the plaza.

The fourth pavilion is dedicated to large rehearsal rooms that double as performance spaces, alongside a library, bookstore and offices.

Another large rehearsal space, specifically for orchestras, is positioned above the main concert hall and leads onto a planted roof terrace with views of the Hai River.

Tianjin Juilliard School's central lobby is lit by four skylights and provides access to all three concert venues. It is publicly accessible all year round via six different entrances.

"In Tianjin, the ground floor lobby acts as a continuation of the surrounding park, accessible through multiple entries open to the public," explained Renfro. 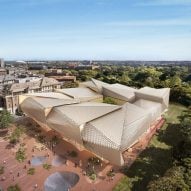 The lobby is intersected by glass-lined bridges that contain classrooms and practice rooms and allow visitors to observe and listen to the students. Where the bridges meet the edges of the building, Diller Scofidio + Renfro has created double-height seating areas.

"All of the teaching and practice spaces occupy five glass-clad bridges that span between the performance pavilions, bringing daylight and views to and from these education spaces while broadcasting the activities of the school to the general public," Renfro said.

Alongside the plaza and lobby, Tianjin Juilliard School is complete with a "digital learning environment" for the public called the Imagination Space, in which people can learn about the schools.

This space features interactive displays and is capable of hosting live-streamed concerts between both campuses.

Other recent projects by the studio include the US Olympic and Paralympic Museum in Colorado. Plans for its pyramidal Centre for Music in London have recently been scrapped in favour of a "major renewal" of the nearby brutalist Barbican estate.