A skyscraper in the form of a doorway by architect Kohn Pedersen Fox that mimics a historic city gate has completed in Seoul.

Built as the headquarters for South Korean conglomerate the Doosan Corporation, the 130-metre-high tower stands beside the Gyeongbu Expressway, a major artery leading into the capital.

KPF's design for the block was informed by the shape of Seoul's historic city gates.

"The gateway design becomes a visual marker for about 1.2 million daily drivers who would be entering and leaving the city," he told Dezeen.

"It has been designed with the old city gate, Sungnyemun – one of the eight gates in the fortress wall of old Seoul – in mind, which was considered the main portal in and out of the city since the 14th century."

A horizontal block that acts as a skybridge sits on top of the two vertical towers, with four-storey glazed atriums serving as routes between the uprights.

In total, the building contains 83,000 square meters of office space along with an auditorium, employee daycare, fitness centre, cafe and museum dedicated to Doosan's history.

Kohn Pedersen Fox designed the building's distinct form so that it would be immediately recognisable and would communicate some of the company's values.

"The design strives for rational simplicity while being highly expressive and impactful," explained Chung. 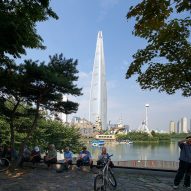 "By using office building masses to define a large rectangular void, the composition affords striking views from the highway," he continued.

"The architecture conveys qualities of solidity and strength, and by organizing itself around a central space, it also communicates the value of community."

The form also created a variety of different-sized offices that could be used by the affiliates owned by the Doosan Corporation.

At the top of the building, the offices in the skybridge are arranged around a large atrium with stepped seating that was designed to be a space where teams can meet and collaborate.

"The brief had asked for a building that could house a number of their own major affiliates, reserving some level of individuality yet, to be well connected for frequent collaborations," said Chung.

"The skybridge signifies a place of meeting and collaboration. It is about sharing knowledge and information. It also offers various experiences compared to what a communal space within a typical office layout might offer."

Chung hopes that people passing on the highway will be reassured by the presence of the modern gateway-shaped office block.

"As the building expresses itself as a gateway and as a cyclical form through its pinwheel massing arrangements, one would be able to sense the dynamism and continuity," he said.

"And perhaps a sense of comfort knowing that the building will always stand to welcome all who would pass through the gateway."