Tilted walls covered in blue ceramic tiles will break up the white geometric exterior of Tikva, a Jewish museum that New York office Studio Libeskind is designing in the district of Belém in Lisbon.

The 3,869-square-metre museum is being developed by Daniel Libeskind's firm with local architect Miguel Saraiva for a site in the Portuguese capital that looks onto the 16th-century Tower of Belém and Tagus river.

Tikva Jewish Museum Lisbon will feature exhibition spaces that "tell the yet untold story of the Jews in Portugal, their culture and history," according to Studio Libeskind.

"At the same time it is to be a project that looks forward, celebrating religious tolerance and cultural difference," the office told Dezeen.

Tikva's design is intended to "echo the scale of the historic city" and will be divided into five adjoining segments.

The idea of creating five interlocking volumes derives from the number of letters in the museum's name, Tikva, which means hope in Hebrew.

The museum's individual segments will be defined by the tilted walls that cut through the building's white plaster exterior. The material was chosen as a nod to local vernacular.

All of the slanted walls will be covered in azulejos, a traditional type of Portuguese ceramic tile, both internally and externally. 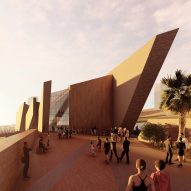 Inside, the museum will contain a mix of permanent and temporary exhibition spaces arranged in a continuous sequence, alongside an auditorium, research and educational facilities.

The roof of each segment will be positioned at different heights. They will be lined with greenery or photovoltaic panels, or used for a rooftop restaurant terrace.

Tikva has been commissioned by The Lisbon City Hall and Haggadah Association, which will oversee its installation and management.

The proposal is one of several Jewish museums completed by Studio Libeskind since its founding in 1989. Others include the Jewish Museum Berlin, the Danish Jewish Museum in Copenhagen and San Francisco's Contemporary Jewish Museum.

Studio Libeskind has also designed Holocaust memorials for the Netherlands, the United States and Canada. The Canadian National Holocaust Monument is formed from tall concrete walls that resemble the Star of David.

Other recent proposals by the studio include Ngaren: The Museum of Humankind in Kenya's Rift Valley and an angular archeology museum for northern Chile.