Photographs show Little Island, the park designed by Thomas Heatherwick on the Hudson River in New York, ahead of its official opening tomorrow.

Originally called Pier 55, Little Island is an elevated park built on top of 132 mushroom-shaped concrete columns in the river at 55 Hudson Greenway.

Located on the edge of Manhattan's Meatpacking District, close to the southern end of the High Line and the Whitney Museum, Little Island officially opens to the public on 21 May 2021 and can be visited for free with timed tickets.

The photos were taken for WSJ. Magazine to accompany an interview with fashion designer Diane von Furstenberg and her husband, businessman Barry Diller, who funded the project.

"My hope is that people will enjoy it, be inspired by it, and they’ll enjoy it 100 years from now," Diller told WSJ. Magazine.

"If that happens, great. Otherwise, they can dynamite it."

Diller discussed the rollercoaster ride of seeing the $260 million project through to fruition.

British designer Thomas Heatherwick proposed the park over the Hudson in 2014.

Construction on the project started in 2016 but stalled in 2017 when the United States District Court vacated its permit after advocacy group The City Club of New York lobbied against it.

"On the day we were supposed to order $80 million worth of cement, our lawyers said [the opposing group] could get an injunction," said Diller.

"Not only would I have all this cement sitting around with nowhere to put it, whatever else I’d done so far would have to be undone too," he added.

"I was angry. I had taken $45 million of the foundation’s money and literally thrown it in the river. I felt irresponsible."

Diller said that New York's governor Andrew Cuomo then called him repeatedly and offered to help get the lawsuit dropped. The project was restarted and relaunched in 2019 and renamed Little Island. 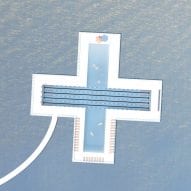 The 2.4-acre park has three stages for live theatre performances, including an amphitheatre of wooden benches facing the river.

There are 500 events scheduled for the park between June and September this year.

Diller said he hopes that Little Island can also become a nightclub, and has applied for a liquor licence.

Heatherwick's other new public project The Vessel, a 46-metre-high viewing platform in Hudson's Yard, has been closed since January 2021 after a third person died by suicide at the site.

Diller said the design team had taken extra precautions at Little Island, spending $6 million on a perimeter system and employing 24-hour security for the park.

"Look, if someone wants to hurt themselves you can’t stop them," said Diller.

"But we did do a lot of studies and from this height, unlike the George Washington Bridge or The Vessel, if you fall into the river, it's unlikely that you will kill yourself."

Thomas Heatherwick is a British designer whose work includes a skyscraper in Singapore covered in plants and a plant-filled cancer care centre in the UK.

Photography is by Adrian Gaut for WSJ. Magazine.