Scottish architecture practice Kettle Collective has unveiled designs for a 703-metre-high supertall skyscraper in St Petersburg, Russia, which would be the second tallest building in the world.

Called Lakhta Centre II, the 150-storey building would also have the highest occupied floor in the world at 590 metres.

The tallest building in the world is the 828-metre-high Burj Khalifa in Dubai, which was designed by Skidmore Owings & Merrill (SOM) and has a top floor height of 585 metres.

Lakhta Centre II would sit alongside the Lakhta Centre, the headquarters of Russian energy firm Gazprom that completed in October 2018 and is currently the tallest building in Russia.

Kettle Collective founder Tony Kettle was previously design director for Edinburgh architecture practice RMJM and created the competition-winning design for the 462-metres-high Lakhta Centre in St Petersburg. The project was later handed over to Russian architects Gorproject to complete.

Renders from Kettle Collective show a design for the supertall Lakhta Centre II skyscraper with a helical glazed form cradled within a metal exoskeleton.

The artist's impression imagines the tower isolated on the Baltic Sea, but it will not be on an island. The final location of the tower is yet to be confirmed. Gazprom said it would provide the land as part of a program of "urban improvement" for the city. 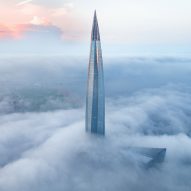 "The design is both aesthetic and functional as it will reduce considerable wind forces that will impact the structure, in turn reducing the size of structural elements required within the building," said Tony Kettle.

"The outer layer of the building is created from spiralling columns that form an open organic helical diagrid, while the structure is carved out by a series of spiral atriums shared with vertical public spaces," he added.

Kettle Collective was founded in 2021 by Tony Kettle and Colin Bone and has studios in Edinburgh and Dubai.