Mexican firm CPDA Arquitectos has completed a residential building that features a stone-clad exterior and a lush courtyard that is not visible from the street.

The project, called Casa Jardin Escandón, is located in Mexico City's Escandón neighbourhood. The area has experienced growth in recent years, with contemporary buildings cropping up alongside Art Deco-style structures.

A key goal for local firm CPDA Arquitectos was to create a building with welcoming spaces and lots of vegetation.

In response, for a rectangular site sandwiched between multi-story structures, the team created a 2,300-square-metre building that features a central garden. A pathway winds through the outdoor space.

"We designed this project to live toward the interior of the complex through a central courtyard – allowing all residential units to have natural light and cross ventilation," the team said.

The building has 14 units, four of which are apartments on the ground level. The remaining units are three-storey townhouses that occupy the upper portion of the complex.

Every unit has some type of private outdoor place, whether it is a balcony, patio or roof garden. On the upper floors, lush greenery spills out of planters and adds to the building's garden atmosphere.

Exterior walls are clad in textured galarza stone, a material that can be found on other buildings in the neighbourhood. Gabled rooflines give the building a distinctive look. 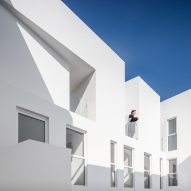 Various recessions and protrusions were incorporated into the street-facing elevation.

At the ground level, one area was carved way to form a threshold with white porcelain stairs leading to a commercial space.

Another threshold – this one in the shape of a gable – leads to the apartment building's lobby and also contains access to a subterranean garage.

Up above, the team created triangular balconies that jut over a sidewalk, and window coves that angle inward.

The interior elevations that surround the courtyard have a different look.

"The interior facades around the central courtyard have a different language, where a game of different windows, openings and gabled roofs are generated, to create a simple, dynamic and ingenious form," the team said.

The open-air space – which features native plants that require little maintenance – is intended to offer residents a place for relaxation and reflection. Carefully placed balconies around the courtyard help foster interaction among residents.

"The result is a discreet, private and peaceful interaction between the residents and their shared 'secret garden'," the team said.

In addition to the courtyard, certain units have access to roof terraces. These upper-level patios are enclosed within pink-hued walls.

The apartments have glazed doors that bring in daylight and provide a connection to the outdoors. Interior finishes include grey porcelain floor tiles, tzalam wood cabinetry, and black granite countertops.

"The materials were chosen to be durable in the city's humidity, and to age gracefully over time," the team said.

Founded in 2016 by Juan Pablo Cepeda, CPDA Arquitectos has completed a number of residential buildings in Mexico City. Others include an apartment block in the San Rafael neighbourhood that has a red exterior made of brick and tinted concrete.