Research studio Lithuanian Space Agency has imagined a fictional world in outer space that would be created from people 3D-scanned at the 2021 Venice Architecture Biennale.

Titled Planet of People, the Lithuanian pavilion is located in the renaissance Santa Maria dei Derelitti church and centred around a 3D scanner that scans visitors to send them into space as digital simulations.

As more people visit and take part in the exhibition the scanned visitors and simulations will form a new planet that is made up entirely of the scanned people.

"It is important to consider the project as an interactive architectural fiction, in which a visitor becomes a co-architect of the planet made out of human bodies," said Lithuanian Space Agency founder, Julijonas Urbonas.

"This project is a crossover between speculative design and architecture," he told Dezeen.

"Here, architecture is not physically tangible but imagined instead," he continued. "By considering architecture on a planetary scale, for instance, terraforming, we're able to view earthly architecture differently."

Through research, case studies, technology and prototypes the pavilion looks to define a new space age, that allows visitors, combined with their imagination, to virtually leave Earth to form a new, fictional planet.

Through its suspending visitors through space and its creation of a fictional planet, the exhibition aims to interrogate issues of space colonialism and sustainability.

"Instead of imagining colonising and trashing other planets without asking them, let's make our own planet from ourselves, so we would be more sensitive to how we care about such environment," said Urbonas.

"On an aesthetic level, the questions of cosmic culture and imagination are being raised," Urbonas continued.

"Meanwhile, on the ethical level, we are preoccupied with space colonialism and astrobiology, as well as discussing space pollution," he said.

"In terms of politics, questions are being raised about already existing space programs, the policies governing the activities of the exploration and use of outer space."

Alongside the space transporting 3D scanner, displayed on a rotating table is a collection of works and prototypes developed by Urbonas and the LSA that explore gravitational aesthetics.

Gravitational aesthetics is a term coined by Urbonas to describe a specific type of architecture, design and art that explore the effects of power on sensual, psychological and social experiences.

These works include Euthanasia Coaster, a hypothetical roller coaster engineered to create a spectrum of emotions from euphoria to thrill, which ultimately leads its users to a euphoric death.

As well as the Cerebral Spinner, a circular structure, which is currently under development, that contains a lecture theatre that spins users and mimics the forces of three G – a force three times higher than the Earth's gravity. 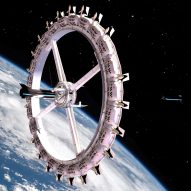 Urbonas explained that the project is based on both fiction and scientific research, stating that an internal part of the project is the blurring of what is human and what is fake

"In our project, we invite to challenge the idea of architecture as an earthly form of imagination, with gravity as its main problem," said Urbonas.

"The Lithuanian Space Agency's work isn't focused on the visibility of a particular country in space but rather on spreading the idea about the openness of space to various people, experts and disciplines," he explained.

"Cultural, social or biological attributes such as nationality, race, sex, sexual orientation, age, social status or political views dissolve whilst suspended in space, detached from systems of judgement and classification prevailing on Earth."

The Lithuanian Space Agency was founded by Urbonas in 2019. The studio aims to marry and blur the lines between architecture, art and design related to space research.

Planet of People will be on display in the Santa Maria dei Derelitti as part of the Venice Architecture Biennale, which takes place from 22 May to 21 November 2021. See Dezeen Events Guide for all the latest information you need to know to attend the event, as well as a list of other architecture and design events taking place around the world.