The Lake Pavilion is located in the town of La Estrella, about 140 kilometres south of Santiago. It rests on a grassy, tree-studded site that slopes down toward Lake Rapel.

Ignacio Correa Arquitecto, which is based in Santiago, created the 85-square-metre, single-storey pavilion that is rectangular in plan with a subtle kink near its centre. The main facade looks north toward a canal that flows into the lake.

"This location ensures the greatest possible distance between the facade and the canal itself, leaving a park of pine trees there, which is the area where the garden is projected," the team said.

A concrete foundation forms a plinth that accommodates the slope of the site.

The building’s exterior walls are made of masonry covered with stucco. Large stretches of glass are framed with black metal.

On the south facade, concrete boxes that protrude from the building hold a wood-burning stove and a storage niche.

The dwelling is accessed via a route that starts at the top of the site and runs along the front facade. 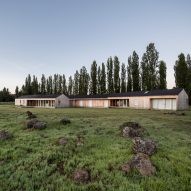 The corridor along the pavilion is shaded by an upturned eave supported by a row of steel columns.

"A metallic structure allows the pillars of the gallery to be moved outward, thus freeing the opening of the facade toward the park," the team said.

Inside, the home contains an open-plan public area and sleeping quarters. The common spaces are located closer to the lake, where sliding glass doors help blur the boundary between inside and out.

The interior features neutral colours and earthy finishes, such as a wooden ceiling and stone-clad wall. The public zone is fitted with woven chairs and a live-edge dining table with matching benches.

Ignacio Correa Arquitecto has completed a number of dwellings in its home country of Chile, including a two-storey dwelling in Patagonia that was influenced by the area’s challenging weather, and a long, wood-clad home that was built for a family of farmers.

Photography is by Pablo Casals Aguirre.