The redesign of Paris' Bourse de Commerce in Paris by architect Tadao Ando is a "complete disaster" of sterile concrete that turns the building into a monument to French colonial violence, says Aaron Betsky.

A billionaire and an architect walked into a bar. "What will you have?" the bartender asked. "Something to forget the evil origins of capitalism," the billionaire replied. "I need something to make me feel big and important," said the architect.

"I have the perfect thing for you," the bartender responded; "A concrete martini. It is round, dry, aseptic, and big enough to make you feel like you own the world."

"Make mine a double," the architect responded with enthusiasm.

That is how I imagine the origin story of the Pinault Collection's new venue in the Bourse, Paris' former stock exchange. It features a concrete ring whose functions, such as they are, appears to be to support two spindly staircases and some air outlets.

It is an example of money trying to transform itself into art and architecture at a gigantic scale.

The Bourse is a building of note. Its basic structure is that of the Halle aux blés, the grain exchange that it housed between 1767 and 1873. After its wooden dome burned down in 1802, Jean Francois Belanger redesigned it to offer not only a functional interior clothed with a classical exterior of great refinement but also to show off the new structure of iron and glass (ferrovitreous architecture, for the nerds) with great panache.

When it became the stock exchange in 1885, Henri Blondel redesigned it in a simpler manner, while five different artists added paintings around the central rotunda that glorified French colonial power. After years of neglect and misuse, the Bourse fell into the hands of one of France's two Titans of Luxury (the other being Bernard Arnault, who, although controlling the greater empire of LVMH, had to console himself with a somewhat better Frank Gehry building on the outskirts for his LVMH Foundation).

Pinault actually has an eye – or has eyes who work for him – and has thus built up a collection of contemporary art that is not only strong but also consistent, concentrating on representational work that ranges from the surreal to the evocative to the hyper-realistic. He collects in depth, and the galleries with work after work by Peter Doig, Marlene Dumas, David Hammons, or Kerry James Marshall are enough to make you forgive many (if not all) sins. 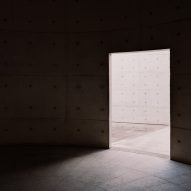 Unfortunately, Pinault also loves Tadao Ando, the former boxer whose work always photographs much better than it is. Ando, in turn, loves concrete and pure geometry. He does not seem to care where he puts his circles and squares. He works with clients, such as Pinault, who can help him assure that the concrete is as fine as marble. The two already strutted their stuff in Venice's Palazzo Grassi and Punta della Dogana, but now they have plunked themselves down in the heart of Paris.

It should have been a job of restoration and that effort has been done with great care by Pierre Antoine Gatier (France's Director of Historic Buildings) and a studio called NeM. The building and its decoration look as if they were finished a few days ago, and most new services have been tucked away with all the skill that good design and money can afford.

The only evidence of friction is the battalion of new lights hanging from the ceilings and the light that, despite scrims, rakes paintings with light. In the basement, the concrete continues as the walls of a small auditorium that is intimate and pleasant, while visitors have the chance to explore the original air conditioning equipment, which is as intricate and beautiful as any of the works of art on display above.

Obscuring everything but the dome, the circle creates a central space that I am sure will be great for parties.

If Ando had shown his generosity by concentrating on how all that worked and by adding those touches that would form an apt counterpoint to the existing structure, it would have been enough. However, he felt it necessary to follow up the work he did for Pinault in Venice by inserting the concrete walls that are his trademark. Here, they mainly take the form of a circle he erected on the former trading floor.

Obscuring everything but the dome, the circle creates a central space that I am sure will be great for parties, and that currently house a few nicely ironic sculptures that turn out to be melting candles, created by Urs Fischer.

Their other function is to provide a secondary staircase to the upper levels, and an outlet for air. The latter causes a lip to protrude that manages that only to ruin one's view of the architecture from the floor but does the same from the balconies above. There is no art hung on these massive walls.

Do we really have to look at Black people serving and doing obeisance to their conquerors one more time?

What that space really needs is not some Ando-ness, but some context or relativizing of the frieze on the dome above it. Do we really have to look at Black people serving and doing obeisance to their conquerors one more time, especially if it is in what is not a particularly good painting? Do we really need to stand in a sanitised place of exploitation through money, ironised only by wry sculptures, but monumentalised by architecture?

The artists whom Pinault has collected can hope that their messages, which are critical, evocative, and in some cases powerful beyond any Gucci bauble the billionaire can sell us, will cut through the conditions in which they are shown –although the white walls, fancy lights, and aestheticizing an in-your-face artist such as David Hammons confronts here makes you wonder about that.

The architect could have done a much better job digging, excavating, exposing, and confronting the two centuries of material present here. Instead, Ando not only drank his concrete martini but created an affectless tomb for all those who suffered and died to make this display possible.

The main photo is by Patrick Tourneboeuf.