Translucent rotating walls pivot to transform the interior of this bookshop in Beijing by Chinese architecture firm LUO Studio.

Located in the 479-square-metre basement space of a shopping mall in the Chinese capital, the Mumokuteki Concept Bookstore sells books as well as design objects, flowers, food and coffee.

The shop occupies the mall's former equipment room, which featured a disorderly arrangement of walls, columns and dense pipelines.

LUO Studio was tasked with working around these existing architectural elements to create an adaptable retail space that could also host events and exhibitions.

The studio, headed by architect Luo Yujie, recognised that installing a conventional suspended ceiling to conceal the pipework would have created a cramped, oppressive space.

Instead, the team worked to restore the original ceilings, walls and columns with a view to making a feature out of their industrial textures.

"The white coating of walls and columns was removed and the irregular edges and corners were fully polished, thereby revealing the aggregate's textures in the concrete columns," recalled the studio.

"The original ceiling structures were retained and endowed with a grey tone, which is slightly darker than the walls and harmonises with the entire space."

Translucent rotating walls were inserted under the beams as secondary structural components.

Composed of a steel frame sandwiched between panels of frosted plexiglass, these dividers can be rotated or fixed freely at any angle to create an adaptable space.

When all of the rotating walls are set perpendicular to the store's entrance, the whole space becomes open and transparent.

However, when they are positioned in parallel to the entrance, the Mumokuteki bookstore is divided into multiple independent parts to create a sense of depth. 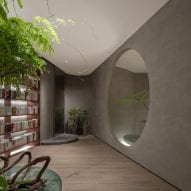 A grid of holes is set into the walls, allowing wooden dowels to be inserted and topped with metal shelving for displaying books and objects.

"The metal bookcases are structural furniture, which also functions as partitions that help increase the variability and flexibility of the space," said the studio. "Each metal bookcase is an embedded structural installation."

Rotating steel-framed walls with clear plexiglass screens are installed at the entrance by the coffee bar, creating what the architects call a "transition area" that leads to the rear of the shop where the dining area and further display areas are located.

All of the store's furniture and the coffee bar is made from elm, which adds warmth to the otherwise industrial interior.

"The overall interior design of the project is not conventional, as all strategies taken are aimed to return the architectural space to its original state," concluded the architects.

"Through the insertion of structural furniture and other various spatial creation methods, the design restores the original appearance and authenticity of the space."

Other interiors with rotating walls include an apartment on the Spanish coast by KMN Architectures where modular storage walls spin around to create extra bedrooms for guests.