Architectural designer Caspar Schols has developed the design for a garden shed with moving walls that he built for his parents into a flat-pack cabin for living and for working.

Schols drew on the Garden House pavilion he completed before architecture school in 2016 to create two commercially available cabins: the ANNA Stay home and the ANNA Meet workplace.

As with Garden House, the cabins have an inner beam-and-glass structure that is separated from the outer wooden walls and the metal roof.

Both the inner and outer parts are set on runners so that the elements can be moved to create different layouts.

"[It is] a sellable, fully inhabitable house, a flat-pack that could be built and re-built anywhere in the world," Schols said.

"A dynamic home in the shape of an open platform to live with rather than against the elements, by playing with the configuration of the layers of the house – just like the way you dress yourself to suit different weather conditions, occasions and moods."

"ANNA Stay has two sliding shells instead of the four in the original Garden House," Schols told Dezeen. "But the two are longer and cover more area."

"It also has a fixed part which houses a kitchen, shower, toilet and storage space," he added.

A bedroom and lounge are within the moving volume, so they can be opened up entirely to the outdoors, or used for other activities.

ANNA Stay also has a mezzanine level in the non-moving half providing space for a second bed.

ANNA Meet, meanwhile, is intended as a cabin for gatherings, for friends, work or parties, or as an office.

Like Garden House it has four moving parts so it can form an enclosed wooden cabin, open up in the middle, or make one long space for gatherings.

The walls and structure of both cabins are made from untreated larch wood and then insulated by five centimetres of sawdust.

Inside, the wooden walls are lined with pale birch plywood. Horizontal windows in the wood walls are intended to offer views from a lower level – like sitting down or in bed.

Both ANNA Stay and ANNA Meet are designed to be transported to site either fully built or flat-packed, and come on or off-grid versions. 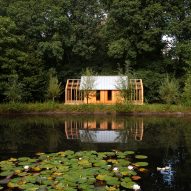 Schols originally came up with Garden House because his mother wanted a flexible space she could use for dinner parties with friends, theatre performances by her grandchildren, painting and meditating.

"It was much more difficult to turn a one-off design into a reproducible and affordable product then I expected," he said.

Schols went to study at London's Architectural Association after completing Garden House and began working on Cabin ANNA. He credits an article on Dezeen with the kickstart for developing it further.

"That article had quite an impact on my life, to put it mildly," said Schols. "I found people that supported me, not only in word, but were also ready to financially invest in ANNA."

"This led to more prototypes in which we experimented with more practical use and temporal or permanent inhabitation. In which the initial spirit of flexibility and connectivity to the environment would remain intact."

Photography is by Tõnu Tunnel and Jorrit 't Hoen. Video by Jonas Sacks.