Chinese company Broad Group has erected a modular 10-storey apartment block, named the Living Building, in just over a day in Changsha, China.

A timelapse released by Broad Group shows the 10-storey building being erected in China by a large team of workers and three cranes in 28 hours and 45 minutes.

According to the company, this is the "world's shortest construction period" for a building of this scale.

The apartment block was assembled from standard container-sized modular units that were made in a factory by Broad Group and have a stainless steel structure.

The container shaped modules stacked with one wall of each unit folding down to become a floor plate and create a column-free space that is 12 metres by 4.8-metres. Windows and balconies fold out from the unit to enclose the spaces.

"10 storeys can be erected in one day"

The modules are transported to the site with all the electric and internal finishes complete meaning that installation can happen rapidly.

"Extremely simple onsite installation: Just tighten bolts and connect [the] water and electricity, as fast as 10 storeys can be erected in one day," said the company. 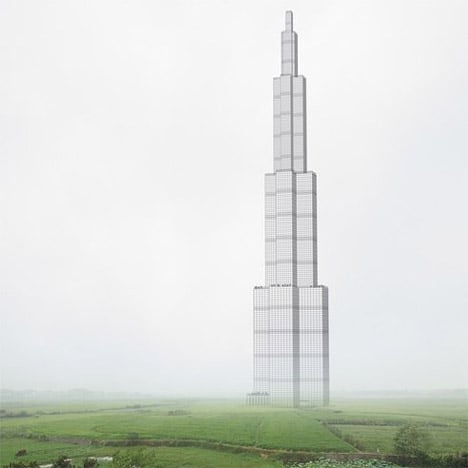 World's tallest skyscraper to be built with ready-made 'Meccano' pieces

According to the company, these B-core slabs are 10 times lighter and 100-times stronger than "conventional" floor plates.

Company claims system could be used for 200-storey skyscrapers

According to the company, the construction method could also be used to build public buildings or even skyscrapers.

"It is perfectly suitable for luxury residences, 200-storey skyscrapers, and also idea for public and residential buildings," said Broad Group.

Broad Group is a Chinese manufacturer of air conditioning units that has expanded into modular construction. In 2012 Broad Group unveiled plans to build a 220-storey skyscraper, which would be the tallest building in the world, from modular components in seven months.

However, the construction of the building stalled shortly after it began amid safety fears and a lack of government approval. It was later reported that the building's foundations had been repurposed as a fish farm.