Architecture graduate Henry Glogau has developed a distiller that purifies water using solar energy and can be assembled from cheap, readily available materials.

The Portable Solar Distiller, which won this year's Lexus Design Award, consists of a two-layered plastic tarp that is suspended on top of a simple bamboo support structure

One of these circular canopies, which have a diameter of 2.4 meters, can generate 18 litres of purified water a day.

The designer, a graduate of the Royal Danish Academy of Fine Arts, hopes that the easily deployable design can help provide clean drinking water for some of the one billion people who are living in informal settlements.

According to Glogau, this is especially important as these communities will feel the impacts of climate change most acutely.

"With the challenges we will face in the near future, we need resilient and autonomous resource infrastructure for democratised access," he told Dezeen.

The contraption harnesses the same water cycle of evaporation, condensation and precipitation that nature uses to make rain.

In Glogau's design, seawater or polluted drinking water is poured into the bottom layer of the canopy, which is made from heat-absorbent plastic and warmed by the sun throughout the day.

This causes pure water to evaporate while any salt, pathogens or other contaminants are left behind in the basin as they are too heavy to be vaporised.

Rather than being released into the air, the clean water vapour then condensates into droplets on the canopy's transparent plastic top layer, which is embossed with "leaf-inspired microgrooves" that channel the water into the centre of the structure where it drops into a collection funnel.

Users can access the fresh water via a tap at the bottom of the canopy or store it in a tank.

"Solar distillation is similar to the hydrological cycle that we know well – the evaporation of water by the sun, which condenses into clouds and precipitates through rain," Glogau told Dezeen.

"It is a simple, yet effective way to create safe drinking water and it has been used by people in different forms for a long time." 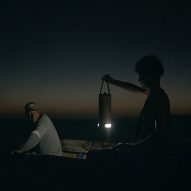 Glogau developed a prefabricated version of the design, which comes with a flat-packed canopy and funnel as well as a simple manual for how to assemble an hourglass-shaped support structure for the canopy from bamboo sticks and rubber bands.

But he also developed instructions for how to construct the distiller with the help of more accessible, local materials using a plastic bottle for a funnel and two reclaimed plastic sheets stitched together for the tarp.

"I wanted to create a modular system, which can be constructed in different ways or materials based on context and user needs," Glogau said.

"The distiller can either be prefabricated, completely locally sourced and manufactured or a hybrid of both – making the design adaptable to local surroundings and available resources."

This sets the design apart from many conventional solar stills, which rely on heavy, inclined glass covers and metal basins that are not as easily accessible for marginalised communities. 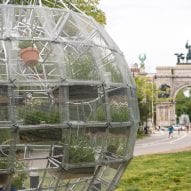 Beyond providing an essential resource, the distiller's suspended design also offers a place for the community to gather and shelter from the sun.

"I believe that resource production can and should be symbiotic with our living environments," Glogau explained.

"In general, I think that when we are designing something for everyday use, we also need to consider how it relates to other areas outside of its basic utility. People's social and emotional needs are just as important."

The design was selected out of 2,000 entries from 66 countries to win this year's Lexus Design Award, which called on entrants to "design for a better tomorrow".

Now in its ninth year, the competition saw six finalists mentored by a panel of established architects and designers including Sabine Marcelis, Joe Doucet and Mariam Kamara.