Winding paths lead visitors through this landscaped garden at the Vitra Campus in Weil am Rhein, Germany, which Piet Oudolf designed to complement the site's iconic architecture.

The Oudolf Garten covers an area of approximately 4,000 square metres at the furniture company's production site, which features buildings designed by some of the world's leading architects.

With production buildings, museums and a showroom created by architects including Nicholas Grimshaw, Frank Gehry, Renzo Piano and Zaha Hadid, Vitra describes the campus as an "architecture park".

According to Vitra chairman emeritus, Rolf Fehlbaum, who began commissioning architects to create buildings for the campus in the 1980s, landscape design was not a consideration in the first decades of its development.

"It was only in the course of connecting the northern and southern parts of the Campus, when the projects by Álvaro Siza and Günther Vogt were commissioned, that landscape interventions were first implemented," said Fehlbaum.

"Piet Oudolf's garden has added a fresh dimension to the campus and opens up a new, ever-changing experience for visitors."

Oudolf is known for his naturalistic approach to gardening, which involves working primarily with perennial plant varieties that are chosen as much for their structure as their flower colour.

The Dutch designer began working with perennials in the 1980s to create gardens that look good throughout the year. His early gardens grouped plants into blocks, whereas more recently he has focused on blending species to create a more natural aesthetic. 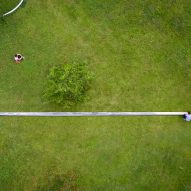 He has also created gardens for the Serpentine Pavilion designed by Peter Zumthor in 2011, as well as for a Maggie's Centre at a hospital in Sutton, England.

The garden at the Vitra Campus features around 30,000 plants and is designed to distract visitors from the buildings and instead focus their attention on the plants.

"I want people to lose themselves in the garden instead of just passing through it," said Oudolf, who created a series of meandering paths that intentionally eschews straight lines or clear focal points.

The gravel paths weave between areas planted with shrubs, grasses, ferns and other herbaceous perennials that are intended to provide different sensory experiences.

The garden was planted in the spring of 2020 and the use of perennial plants that mature quickly means it is already established enough to welcome visitors.

The site chosen for the garden incorporates two sculptural interventions called Ring and Ruisseau, which were designed by Ronan and Erwan Bouroullec in 2018.

Ring is a circular steel bench positioned under a cherry tree, while Ruisseau is a line of marble featuring a narrow channel filled with running water.

Visitors to the garden are confronted at various points with views of the park's buildings, including a geodesic dome used for hosting events and the VitraHaus showroom completed by Herzog & de Meuron in 2010.

Also at the Vitra Campus, German artist Thomas Schütte placed a log cabin, that was topped with a shingled roof, on the campus.

Photography is courtesy of Vitra.