Herzog & de Meuron has designed a 17,695-square-foot (1,643 square-metre) two-storey structure for Calder Gardens, much of which will be located underground.

"A kind of conceptual path which made us carve out the ground rather than build forms and volumes above – we were looking for space to present Calder's work in a new and unprecedented way," said Herzog & de Meuron co-founder Jacques Herzog.

"That space in the making eventually grew into a whole sequence of different galleries and also rather unexpected spaces, niches and gardens," he continued.

"And not only galleries in the classical sense, but every corner and angle, every stair and corridor should be offering itself up as a place to put art."

Overall, the project will occupy 69,319 square feet (6,439 square metres) and be located off Benjamin Frank Parkway in Downtown Philadelphia. The city is the birthplace of the artist, who is known foremost for his massive mobiles.

A rectilinear primary structure will protrude from the hillside and be clad in reflective metal cladding that will "blur the boundaries between architecture and the natural world – the material and the immaterial," according to Herzog & de Meuron.

Two large stone plinths will sit adjacent to a cave-like primary entrance that will lead to a double-height space.

A large metal sculpture will be placed in the centre of this space, which will have a mezzanine above that will act as both a viewing platform and a hallway to bring visitors into the galleries on the upper floor.

Large windows will be placed throughout the facade to let the gardens outside complement the sculptures and vice versa.

The architects opted to use as much natural light as possible for the design, with sculptures set to be housed in partially-enclosed rooms that are open at the top to let the light in.

Four-season flora, both local and imported, will fill the garden and cover parts of the building's facades. Works will be positioned in the gardens as well, to provide many different contexts in which to see the art.

"For Calder Gardens, the horticultural design must also serve the works of art," said Oudolf. 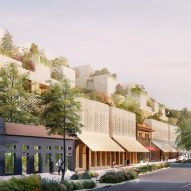 "My hope is that people will take the time to stand still and think here, to fully experience these elements together and have an emotional reaction that stays with them long after their visit," he added.

The push for the project was led primarily by the non-profit Calder Gardens foundation, and the site will be managed by the adjacent Barnes Foundation, an art institution.

The Ballinger Company will serve as the architect of record for the project which breaks ground in 2023 and is expected to be completed by 2024.

Other projects recently announced by Herzog & de Meuron in the United States include a mass-timber shopping centre in Austin, Texas.