Copenhagen studio 3XN has completed Olympic House, a new headquarters for the Olympic and Paralympic Games in Lausanne, Switzerland.

3XN collaborated with Swiss architecture office IttenBrechbühl to create the building, which has been designed around the International Olympic Committee's (IOC) principles.

Built within a public park on the shore of Lake Geneva, Olympic House stands next to 18th-century castle Château de Vidy. Created as offices for the organisation's 500 staff, many of the building's elements reference the Olympics.

"Every part of the building has a meaning," said Jan Ammundsen, head of design at 3XN.

"From the dynamic glass facade that mimics the high-powered athleticism of an Olympic athlete, to the central staircase that references the iconic Olympic rings and the spirit of international collaboration that they represent

The five-storey building is wrapped in a glass facade, which was created using parametric design – a digital process that allows you to test various design iterations.

Appearing differently from all angles, it is intended to represent the energy of an athlete. It also allows visitors to the park to see inside the building and observe the workings of the Olympic organisation.

"The visual transparency of the building is a metaphor for the new direction of the IOC as they strive towards a greater organisational transparency, reflected in the overall structural changes initiated by the Olympic Agenda 2020," explained Nielsen.

"The glass facade allows the daily work of the building’s inhabitants to be visible from the outside, and also celebrates its particular location by providing stunning views of the lake beyond."

The headquarters is arranged around a central atrium, with all five storeys connected by the Unity Staircase. 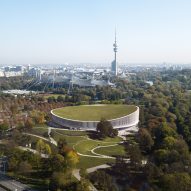 This oak staircase, which has been designed to references the five rings on the Olympic flag, is surrounded by a meeting rooms and exhibition spaces, with a cafeteria on the ground floor.

"The staircase is designed to be visual expression of unity and collaboration within the organisation and the Olympic Games," added Nielsen.

Around the central atrium the offices have been designed to follow the Olympic core values of collaboration, flexibility and movement.

"At 3XN we believe that architecture shapes behaviour – thus, we have designed the interior with as few structural constraints as possible, in order to facilitate interaction and communication among the staff," added Ammundsen.

"The offices can be easily moved though the open spaces, and workspaces can be modified to suite the ever-changing needs of the organisation."

The Olympic organisation wanted the the building to be an exemplar of sustainable construction, and the building has been certified as achieving LEED Platinum.

To achieve this, 3XN and IttenBrechbühl incorporated numerous energy- and water-saving measures into the office block.

The facade has a double skin, with the inner layer triple glazed, and the whole building is designed to be extremely airtight. Rainwater is captured to be used in the building and solar panels have been installed on the roof.

During the construction process more than 90 per cent of material from buildings that were previously on the site were reused or recycled.

The studio is currently designing a wave-shaped Climatorium on Danish coast, a basketball arena in Munich's Olympic park, and a residential high-rise in Toronto.