The New-York Historical Society will be extended by Robert A M Stern Architects to create a permanent home for The American LGBTQ+ Museum.

New York City's oldest museum will gain 70,000 square feet of classroom, gallery and library space that it will share with the city's first museum dedicated to LGBTQ+ history and culture.

Robert A M Stern Architects (RAMSA) received unanimous approval from the Landmarks Preservation Commission for its plans for the building at 170 Central Park West.

"It's been a privilege to work with the New-York Historical Society to design an expansion of its landmark building, enabling it to extend its broad and vital mission to a growing audience that ranges from local schoolchildren to international visitors," said studio founder Robert A M Stern.

"With input from engaged and supportive neighbors and in response to the historic neighboring townhouses, the design of the expansion is sympathetic to the palette and rhythm of the 1908 building and its 1938 additions."

The majority of construction will occur at the rear of the building, along West 76th Street. The first phase involves creating below-ground spaces for the Patricia D Klingenstein Library, which contains rare copies of America's foundational documents.

These are currently housed off-site and will require state-of-the-art storage in order to be preserved and made accessible for library users.

Next, three storeys of galleries and a classroom will be built above the new library and integrated with the current layout during phase two.

A stack of rooms for meetings, conservation and mechanical services will also be constructed on top of the junction where the old and new sections will connect.

The American LGBTQ+ Museum will occupy the entirety of the extension's fourth floor, encompassing two galleries with access to the roof garden, and areas for offices and storage. 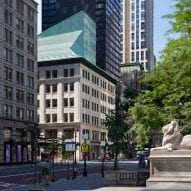 During construction, its team will partner with New-York Historical Society to develop programming in the existing building and outdoor spaces for the museum's visitors and school children.

"The respect and rigor with which New-York Historical Society has approached this process, including their consultation with local communities, mirrors our own commitment to building a thoughtful, welcoming, queer, and inclusive experience for our visitors and partners," said chair of the board of directors at The American LGBTQ+ Museum Richard Burns.

"We look forward to bringing a dynamic new museum to life within this cherished, deeply-respected, and growing New York City landmark."

New-York Historical Society trustees purchased the lot behind the museum as far back as 1937. 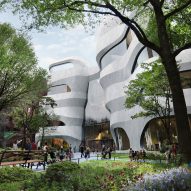 The institution, which was founded in 1804 and aims to tell stories of New York and the nation's diverse populations through its exhibits, is finally embarking on its plans for expansion after receiving financial backing from the New York City Department of Cultural Affairs in partnership with the City Council.

"How gratifying it is to realise the dream of telling the American story in all its complexity in state-of-the-art educational spaces and a brand-new gallery dedicated to the struggle for civil rights of the American LGBTQ+ community," said New-York Historical Society president and CEO Louise Mirrer.

New-York Historical Society is located a block to the south of the American Museum of Natural History, which is also undergoing expansion work overseen by Studio Gang.

On the other side of Central Park, the controversial extension to the Frick Collection by Selldorf Architects is underway, while its Renaissance artworks are displayed at the Marcel Breuer building that was previously used by The Whitney Museum and then The Met.

The renderings are by Alden Studios for Robert A M Stern Architects.