Built on a former railway station in Paris's 18th arrondissement in the northeast of the city, the development occupies a city block.

Moussafir Architectes and Nicolas Hugoo Architecture each designed a timber, glass and concrete tower containing 105 townhouse-style apartments at either end of the development.

In response to the masterplan for the seven-hectare La Chapelle International development, which called for a uniform podium forming a base for two towers, 18 small live-work spaces clad in gridded-metal cladding were placed between the two towers.

The street-level podium, which also contains common areas for the towers and two shops, displays the same orthogonal facade structure across the entire city block.

The residential towers present greater aesthetic variation while maintaining overall consistency with the rest of the scheme.

The taller G2 tower was developed by Jacques Moussafir's firm, while Nicolas Hugoo's studio designed the G1 tower to complement the facade it created for the concrete podium.

The hybrid premises containing housing and small workspaces are called Small Office Home Office (SOHO) units and are intended for use by artisans, small businesses and self-employed workers.

The SOHOs aim to merge professional and residential spaces by applying a uniform material palette throughout the interiors. Each unit has a business entrance facing the street and private access from the communal area at the centre of the block.

The upper levels of the SOHOs are arranged around six staggered semi-private terraces. The terraces slot in around six compact patios that allow daylight to reach living areas on the ground floor.

The densely packed accommodation is intended to reference the traditional Parisian streetscape, while the sloping roofs evoke nearby train sheds.

"We imagined the fifth facade as a new 'metal blanket' made of perforated and ribbed aluminium that seems alternately to be either extruded to form hipped roofs or stamped to generate patios and terraces clad with galvanised steel grating," added Jacques Moussafir, whose firm designed the SOHOs.

The G1 apartment building, which was designed by Nicolas Hugoo Architecture, was designed to feel light and open to the surrounding city, with projecting balconies providing views in all directions.

Larch joinery brings rhythm and organisation to the facades, which incorporate fixed and opening windows interspersed with anodised aluminium panels.

The lightweight aesthetic is enhanced by the lack of visible structure on the building's exterior, along with the prefabricated concrete balconies that narrow at the edges.

The building is organised around a compact circulation core, with functional spaces situated closest to the centre to free up the outer areas for the living spaces and bedrooms. 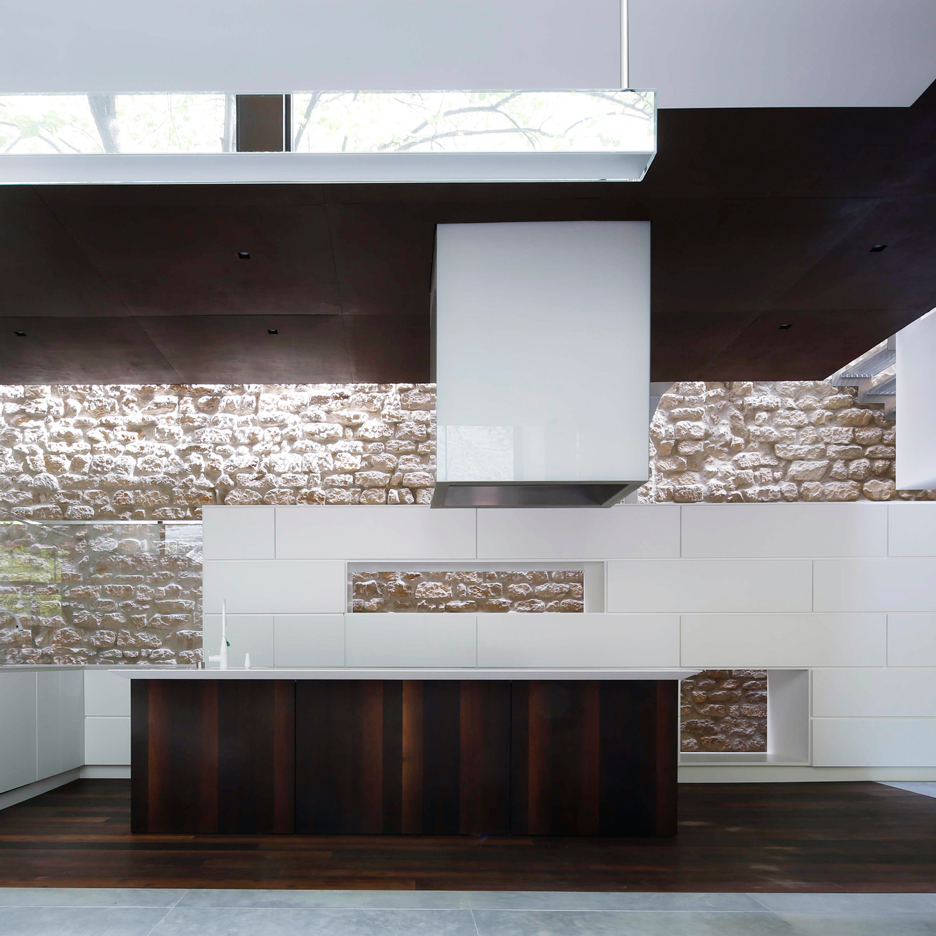 The second tower, known as G2, was designed by Jacques Moussafir. It features cubic proportions and accommodates six apartments on each floor.

As with G1, the apartments are arranged with living areas towards the edges to optimise the available light and views.

The building's structure is provided both by the central core and by the waffle design of the concrete facades. This configuration means that long spans are not required and frees up some of the corners.

Varying the orientation of the terraces allowed for the creation of four different floor plans across the ten levels. This arrangement also helps to break up the facades into a non-uniform pattern that expresses the positioning of each apartment.

Jacques Moussafir founded his eponymous studio in 1993 and now works across various fields including cultural and residential projects.

The studio's previous work includes a Parisian home with a staircase that can be glimpsed through patterned shutters and a concert hall in Tours, France, covered with a synthetic material that resembles a quilt.

Nicolas Hugoo worked as a project manager at Moussafir's firm for five years before co-founding the Bang Architectes collective and eventually setting up his own agency focused on managing urban architecture projects.

The photography is by Herve Abbadie unless stated.