These images by photographer Iwan Baan show artist Yayoi Kusama's pumpkin sculpture installed on a pier on Naoshima Island, Japan, before it was swept away by a typhoon earlier this week.

Images and video footage of the sculpture crashing into the sea went viral earlier this week after an unexpectedly severe tropical storm caught staff at the museum that owns the sculpture by surprise.

Employees at Benesse Art Site were powerless to do anything but record the event as the sculpture was dragged from its fastenings by the waves and crashed into the pier, breaking into three pieces.

Baan captured the sculpture when it was still in one piece.

The architectural photographer's images show the distinctive black and yellow polka-dotted sculpture, which is simply titled Pumpkin, installed near the edge of a pier in Gotanji, Naoshima Town.

Aerial photographs emphasise the sculpture's precarious position over the sea, while a night shot (top) shows the fibreglass-reinforced plastic sculpture glowing from within like a beacon.

Benesse Art Site has exhibited the pumpkin on the island since 1994. Usually, the sculpture is removed during bad weather, but the storm that hit Naoshima Island on Monday 9 August was unexpectedly severe.

"Although the museum, which exhibits many outdoor artworks, has discussed countermeasures to protect the artworks and remove them whenever a typhoon is approaching, in the case of Typhoon No. 9 on August 9, 2021, the forecast itself changed rapidly and there was no official warning on that day," Benesse Art Site said in a statement.

"So the decision to remove the artworks was delayed and we were unable to respond to the sudden waves."

Employees managed to retrieve the majority of the damaged sculpture once the storm eased off. Benesse Art Site is currently working on repairing the sculpture.

Support from the artist herself is expected to ensure that the artwork is rebuilt successfully and returned to its original location. Until then, Pumpkin will not be available for public viewing.

"We will re-evaluate the accident and strive to prevent its recurrence and further strengthen measures for the management of artworks," the museum said. 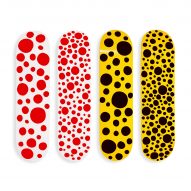 Yayoi Kusama is widely known for her distinctive polka-dot artworks all around the world. Her red and white designs were wrapped around trees in New York's Botanical Garden earlier this year.

Back in 2012, the artist covered a Louis Vuitton store in store in red polka dots and created an accompanying capsule collection of polka-dotted clothes for the fashion brand.