Moscow's chief architect Sergey Kuznetsov has completed a pipe-shaped cabin, constructed like the hull of a ship and balanced on the edge of a slope in Russia's Nikola-Lenivets Art Park.

The holiday home was conceived for the annual Archstoyanie festival, known as Russia's Burning Man, and will remain in place after the event to provide accommodation for visitors of the outdoor art gallery, which is set in a nature reserve near the city of Kaluga.

Clad in a single, continuous sheet of stainless steel that reflects the surrounding forest, the building is 12 metres long and weighs around twice as much as a fully-grown elephant. But Kuznetsov claims its structure is held together using only six bolts.

"The idea was to create something with an element of magic," he told Dezeen.

To create the impression of the cabin hanging in mid-air, its foundation is concealed inside a small hill that had to be almost completely demolished during excavation, before being rebuilt and reinforced with sand cushions.

Kuznetsov and construction company Krost devised the cylindrical structure mounted on top by drawing on a shipbuilding technique known as transverse framing.

In lieu of traditional wall studs, this involves a system of closely spaced, circular ribs that run along the length of the entire building.

Cut from sheets of stainless steel and connected by horizontal guides known as stringers, they create a strong yet lightweight frame that is able to support itself without breaking.

"The entire structure consists of six cylindrical modules, simultaneously manufactured and then connected to each other," Kuznetsov explained. "The same thing happens in shipbuilding. Separate sections of the hull are made in the workshop before being assembled into a single structure on a dry dock."

"The biggest challenge at this stage was to put the cylinders together – precisely, coaxially, with virtually no tolerances," he added. 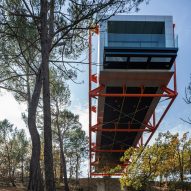 Underground, a concrete slab foundation extends in the opposite direction of the cabin to act as a counterweight.

This also houses the plumbing and electricity, with the kitchen and bathroom located directly above while the bedroom occupies the far end of the building that floats above the forest floor.

Kuznetsov says no one on his team knew whether the structure was going to hold up in its cantilevered position until it was physically installed on-site, due to the complexity of the construction.

"The designers calculated potential deformations but due to the lack of relevant experience, no one could say with confidence how the structure and most importantly its cladding would behave when installed," Kuznetsov said.

"After removing the supporting structures, the bottom of the console dropped by 22 millimetres within a calculated maximum tolerance of 30 millimetres, which caused an incomparable feeling of joy and relief for everyone involved."

Kuznetsov is one of the co-founders of Russian practice SPEECH Tchoban & Kuznetsov alongside Sergei Tchoban. Before leaving the firm in 2012, he completed a number of international projects including the Museum for Architectural Drawing in Berlin, as well as representing Russia at the Venice Architecture Biennale on four separate occasions.

In his role as chief architect of Moscow, Kuznetsov has overseen the refurbishment of the city's Luzhniki Stadium by SPEECH as well as Diller Scofidio + Renfro's Zaryadye Park, which Russian government officials have accused of corrupting the local youth after a number of couples were caught having outdoor sex.

The photography is by Ilya Ivanov.

Archstoyanie is a festival for large-scale landscape art and architecture that takes place in the Nikola-Lenivets Art Park every year. See Dezeen Events Guide for an up-to-date list of architecture and design events taking place around the world.