Around half of the carbonate emissions from cement production are reabsorbed by the material when used in buildings and infrastructure, according to the latest IPCC climate report.

The "cement carbonation sink" absorbs an estimated 200 million tonnes of carbon every year, according to an overlooked section of the report published earlier this month ahead of the Cop26 climate conference.

"Direct CO2 emissions from carbonates in cement production are around four per cent of total fossil CO2 emissions," says the full version of the Sixth Assessment Report from the Intergovernmental Panel on Climate Change.

"The uptake of CO2 in cement infrastructure (carbonation) offsets about one half of the carbonate emissions from current cement production."

However, carbonate emissions only represent between 40 and 60 per cent of total emissions from cement production so carbonation will reabsorb around a quarter of the emitted carbon.

"The key chapter in [the IPCC report] recognised concrete carbonation for the first time," said Richard Leese, director of industrial policy, energy and climate change at the Mineral Products Association, which represents the UK's cement industry.

"Now the international accounting needs to be updated to take account of the carbonation of concrete just so they can get the math right."

The IPCC report sets out the latest scientific understanding of climate change, which for the first time states that increases in atmospheric greenhouse gases are "unequivocally caused by human activities".

"Global warming of 1.5 degrees Celsius and two degrees Celsius will be exceeded during the 21st century unless deep reductions in CO2 and other greenhouse gas emissions occur in the coming decades," it states.

Growth of direct CO2 emissions from cement slowed in the 2010s

Cement production produces large amounts of carbon dioxide when limestone is crushed and burned to produce clinker, which is used as a binder.

Additional emissions are caused by the large volumes of fossil fuels that are usually used to heat cement kilns. These are not taken into account in the IPCC's figures.

Burning separates the limestone, which is a calcium carbonate material, into its calcium and carbon constituents. Calcium, a key ingredient in cement, is retained in the calcination process but the carbon combines with oxygen to form CO2, which escapes. 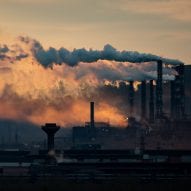 However, according to recent research cited in the IPCC report, around half of the carbon produced during calcination is later reabsorbed by cement and concrete via a natural process called mineral carbonation.

The process is being explored as a way of capturing atmospheric carbon by companies including Australian firm Mineral Carbonation, which has developed a way of recreating the process artificially.

Others making use of mineral carbonation include Royal College of Art graduate Kukbong Kim, who recently unveiled a paint containing crushed concrete that absorbs CO2, and Dutch designer Teresa van Dongen, who has highlighted the potential of olivine sand to capture carbon.

The cement industry is the biggest single emitter of CO2. A landmark 2018 report by Chatham House found that it is responsible for around eight per cent of global emissions.

But the role of cement as a carbon sink has been missed, according to Jenny Burridge, principal structural engineer at The Concrete Centre in London.

"Concrete absorbs CO2," she said. "We haven't been talking about it very much. But actually, that's one of the things that we're looking at at the moment."

"How much carbonation actually happens? How much of a carbon sink is the total concrete mass of that we have in the UK and elsewhere in the world?"

"Different types of concrete absorb CO2 at different rates," she added. With reinforced concrete, structural engineers specify concrete with low carbonation potential as this can lead to corrosion of the steel reinforcements. 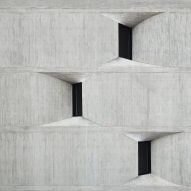 But other types of concrete such as blockwork could be used to sequester atmospheric carbon, she suggested. "Blocks actually carbonate quite quickly," Burridge said.

Crushed concrete has even greater potential since it has a greater surface area that can absorb CO2, Burridge said.

"There are huge arguments for not knocking a building down," she said. "But if you do knock it down, you should make sure that you crush the concrete up because then the carbonation happens quite quickly."

"You can use the crushed concrete for aggregate," she added.

According to the International Energy Agency, 4.1 billion tonnes of cement were produced globally in 2019. China accounts for around 55 per cent of global production, followed by India at 8 per cent.

Efforts to decarbonise the cement industry include a project in Sweden to build "the world's first carbon-neutral cement plant" and Carbicrete's drive to produce carbon-capturing concrete.