The recognition of concrete's ability to absorb atmospheric carbon in the latest IPCC climate report means climate change "is worse than we thought," according to Cambridge University materials scientist Darshil Shah.

Shah contacted Dezeen in response to last week's story reporting that the Intergovernmental Panel on Climate Change has identified cement infrastructure as a carbon sink.

"We are very concerned about the incorrect message [the story] gives, particularly in the run-up to the COP26 climate conference and given the urgency for climate action," Shah said.

The IPCC report points out that around half the carbonate emissions from cement production are reabsorbed by concrete structures.

But Shah said these emissions are "only a fraction" of the total produced by the cement industry, which is estimated to produce around eight per cent of all global greenhouse gases.

This "cement carbonation sink" absorbs an estimated 200 million tonnes of carbon every year, according to the landmark IPCC report published earlier this month ahead of the Cop26 climate conference.

​​"The uptake of CO2 in cement infrastructure (carbonation) offsets about one half of the carbonate emissions from current cement production," the report says.

In reality, Shah said, carbonation only absorbs around a quarter of total cement-making emissions, when you take into account the fossil fuels that are burned to power cement plants.

Shah, who is senior researcher at the Centre for Natural Material Innovation at Cambridge University, said that the acknowledgement of the cement carbonation process in the IPCC report means that "the [climate change] problem is worse than we thought".

This is because levels of atmospheric carbon are rising to dangerously high levels even with this newly recognised "sink".

Shah added that he was "a bit frustrated with the IPCC using the word 'sink' because that gives the impression that it is beneficial." 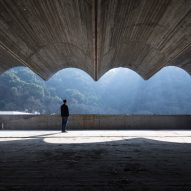 "Cement and concrete are not carbon sinks," Shah said. "They are net sources [of CO2]."

"Timber or plant-based materials are net sinks and we need to construct more with them," added Shah.

The IPCC report refers to "carbonate emissions", which occur when limestone, which is a calcium carbonate material, is crushed and burned to produce clinker.

This calcination process separates the calcium, which is retained, from the carbon, which combines with oxygen and is released into the atmosphere.

The IPCC report refers to these emissions but not the more substantial emissions created by other aspects of cement production. Dezeen's original story has since been updated to make this clearer.

"Carbonate emissions, or process emissions, are only a fraction of the emissions related to cement production and use," Shah explained.

Shah also said that "cement carbonation requires very specific conditions" including humidity of between 40 and 80 per cent and open-air conditions.

"Submerged or buried concrete or concrete will not undergo carbonation," he said, adding that "concrete carbonation happens at an extremely slow rate: an average of one to two millimetres per year."

Shah, who specialises in studying biomaterials, previously spoke to Dezeen about the carbon-capturing potential of hemp.

"It's even more effective than trees" at sequestering carbon, he said. "Industrial hemp absorbs between 8 to 15 tonnes of CO2 per hectare of cultivation," which is twice as much as forests.