London practice Pirajean Lees has converted a nightclub in Dubai into a restaurant informed by Japan's jazz age and the grandiose parties of silent film actor Sessue Hayakwa.

The restaurant, which serves modern twists on Japanese classics, is named Mimi Kakushi after the distinctive bob haircut worn by the young Japanese Moga, or modern girls, who adopted western fashions in the period after the first world war.

This jazz age aesthetic is also reflected in the interior of the eatery, which is layered with rich textures and materials including traditional joinery, hand-painted walls, beaded curtains and bespoke stained glass windows.

In particular, the duo looked to the larger-than-life persona of Sessue Hayakwa, Japan's first silver screen star to find success in Hollywood.

"Hayakwa perfectly personified this era," said the studio. "Known for his lavish parties, gold-plated car and castle-style mansion, Hayakwa's story became the foundation for the design."

The existing architectural features of the nightclub, such as the level changes in the ceiling and structural columns, guided the spatial layout of the restaurant.

In the reception, diners are welcomed by hand-painted walls before making their way past a Japanese colonial-style bar with views across the sushi counter to the tables beyond.

An open kitchen, visible throughout the space, creates a sense of theatre in the restaurant.

All electrical and mechanical equipment, as well as the ventilation system, is hidden behind a straw ceiling grid to preserve a "residential feel" within the commercial space. 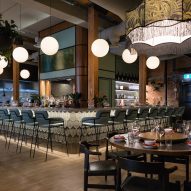 Throughout the project, Pirajean Lees was careful to filter the strong Dubai sun, which penetrates into Mimi Kakushi from two different directions.

To the east, a bespoke stained glass window was installed on the existing facade, bathing the space in warm, amber light. To the south, a wooden bead curtain is used alongside mirrored tables and walls to refract the light.

"Mimi Kakushi is on the top floor of the building, with dual exposure on the east and west with fully glazed elevations," the studio explained.

"It gets direct, strong sunlight all day long, which can be very uncomfortable when dining. We understood that instead, we could use it as an advantage, as a design element in itself to transform the space throughout the day as the light changes."

Sliding lattice screens made from dark timber can be used to divide the open-plan restaurant into a sequence of smaller spaces for privacy and special events.

All lighting, as well as the scalloped-edged tables and a selection of the seating, were designed in-house by Pirajean Lees.

Photography is by Maha Nasra Eddé.