Argentinian firm PSV Arquitectura developed this grand concrete slab house in Córdoba in longitudinal strips so that all of its spaces would face north.

Casa SAB, which backs onto the Cañuelas Country Golf club in Argentina, is entirely shielded from the strong western sun, while each of its rooms enjoys good light from its northern aspect.

To manage this, PSV Arquitectura designed the house around two main exterior quadrants: an entrance courtyard and a central courtyard.

The studio composed the house from overlapping layers, with concrete slabs running longitudinally from east to west and stone-clad walls from north to south.

"The design is developed in a series of layers that, as they overlap, give rise to the unique shape of the project," PSV architect Gonzalo Viramonte told Dezeen.

Rooms are arranged along two longitudinal strips, linked at their midpoint by the entrance and at one end by a gallery. The spaces are broadly divided into a social block and a private block.

The private block houses three bedrooms and an office, while the social block has open-plan living room and dining room spaces as well as a kitchen. A garage sits at one end of the house.

"We started from a grid and we decided to group and sector the house according to its uses," Viramonte continued.

"For this reason it was thought from two concepts: the social and the private. Both concepts were then developed materialising them in strips arranged longitudinally on the ground floor around their courtyards, linked by the gallery and the entrance hall."

"The house seeks to relate to its central patio, which is why it functions as an articulating element between both strips," he said. 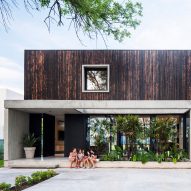 Courtyard-facing spaces have iron screens that can be opened to create connection and cross-ventilation, or closed for more privacy.

The concrete and stone walls are complemented by timber ceilings and built-in features.

The materiality of the house is meant to generate a mood of austerity and simplicity.

"This house is characterised by its sincerity in terms of both structural, material and functional expression, where the different conceptual paths are clear, where in their search to articulate spaces they are related to the visual link between the house and nature, and where noble materials such as stone, concrete and wood interact with interior design," said Viramonte.