Danish studio ReVærk has completed House of Nature, a school building designed to promote learning about nature through its traditional timber structure and wooden shingles, which has been shortlisted in the civic building category of Dezeen Awards 2021.

The Aarhus-based practice designed the building to accommodate the teaching of Nature and Outdoor Life at the Silkeborg Folk High School, with the building itself conceived as a lesson in sustainable timber construction for its users.

Framing views of an adjacent forest, the timber structure, acacia shingle cladding, Douglas fir interiors and wood fibre insulation were all part of a strategy to design a building "as purely based on wood as possible".

"The brief for the new educational building was to create a space that exudes nature and creates a close connection to the surrounding forest," said the studio.

"The construction is inspired by the old Danish 'bullade' timber frame construction, dating back to the Viking age."

A cluster of four of these lightweight timber-framed forms make up the school building, connected internally but visually distinct from the outside, where they gently fan out along the edge of a curved, decked path.

Presenting a blank elevation clad with distinctive acacia shingles on approach from the north, the building opens up to the forest along its southern edge, with full-height windows forming a close relationship between the classrooms and the trees.

"The surrounding forest gives a play of light that creates a unique atmosphere in every room," said the practice. 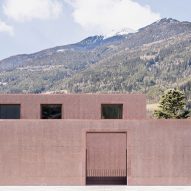 This atmosphere is enhanced by the Douglas fir planks that cover the interior, working with the exposed timber structure and parquet flooring to create a feeling of being immersed in the woods.

Simple pendants and light switches in black have been chosen to complement the "rustic" nature of the building, and provide a contrast to the paler shades of the timber.

A lightweight metal staircase in the centre leads up to the second storey of the central block, where a circular window above a built-in seating area looks out across the forest canopy.

The whole structure has been designed in a way that could be easily dismantled and removed from the site with little trace. Screw-pile foundations raise the building slightly off the ground to avoid flooding.

Small vents along to top of the windows form part of the ventilation and heating strategy, which is based on thermal buoyancy to avoid the need for mechanical systems.

Among the other projects included in the civic building shortlist of Dezeen Awards 2021 are Bodø City Hall in Norway by ALL, and Cinema Le Grand Palais in Cahors by Antonia Virga Architecte.