A steep, timber-framed roof shelters this triangular home by Japanese practice Moriya and Partners, located on a cliff edge overlooking the sea in Yawatano, Japan.

Responding to the client's request for "a view of the sea from the living room", the home, called Setoyama, has been shortlisted in the rural house category of Dezeen Awards 2021.

The wood-clad upper level of the home houses a large, triangular living area and terrace, raised to create a vantage point for looking out at a nearby forest and the sea.

A narrow kitchen sits alongside this space, and below a small bedroom sits within a long, thin concrete base that supports the home.

The distinctive form of the building is designed to blend in with the surroundings, with its steeply sloping, asymmetric pitched roof informed by the precipitous drop of the cliff-edge.

"One of the factors that greatly influenced the form of the building was the steep slope of the river that runs beside the site," practice founder Takahiro Moriya told Dezeen.

A timber truss structure supports this geometric roof form, extending from steel columns on the concrete base to create a large overhang. Thin steel supports in one corner minimise the impact on the ground.

"We tried to avoid modifying the land itself or touching the boundaries of the forest...by building a certain distance from this natural territory, the villa lightly blends into the surrounding environment, becoming buried in the forest," said the practice. 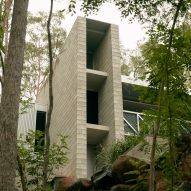 The upper level's overhang creates a covered external seating area at the southern end of the home, finished with wooden decking and hugged by an informal stone wall.

Inside, the framework of the roof has been left exposed, combined with dark timber planks to create a dramatic ceiling above the main living space. This area is illuminated by a triangular run of windows that gradually increases in height along the edge of the home.

Built into the wall of the living space are the kitchen's storage areas and countertops, opposite a large, triangular bar and dining area that extends out into the lounge.

Two steps lead to the external terrace at the southern end of the home, sitting alongside a glazed bathroom block designed to give the feeling of bathing in the forest.

Below, the more private and enclosed bedroom is accessed via a small staircase, and has its own direct access out onto the covered ground-floor terrace.

Other projects shortlisted in the rural house category of Dezeen Awards 2021 include Mt Coot-Tha house in Brisbane by Nielsen Jenkins, a forest retreat that has been designed to withstand bushfires.