Antwerp studio Bovenbouw Architectuur has designed a house in Belgium with an interior that spans four levels and was designed to make visitors feel like they are walking up a path.

Located in Bazel, close to the River Scheldt in northern Belgium, the brick bungalow follows the shape of the sloping terrain that surrounds it. At its lowest level, the front door opens up to a walkway of wooden steps that leads through the house.

To the right of the walkway are doors leading to three bedrooms and two bathrooms, while a large window on the left provides views out to a sheltered terrace that functions as an "outdoor room".

At the top of the house sits a large living room and kitchen, with windows to the east and west and French doors that open out to the terrace.

"We liked the idea to see the house as a walk up the slope, a path," Bovenbouw Architectuur founder Dirk Somers told Dezeen. "When you walk up the 'path', the corridor, you look into the trees in the back of the garden."

"When you arrive in the living room you turn back and look into the patio back to the street," he added. "Because of the sloping walls, you look out into the green without seeing the street or the adjacent villas."

The house was commissioned by a client for her mother, whom she and her family frequently visit at weekends.

Bovenbouw Architectuur wanted to create a design that would set this new house apart from the more traditional houses in the neighbourhood.

"Most older houses in the street use a split level section, but since this is a modest house we preferred to design the house in a more connected relation to the topography," Somers said.

The 146-square-metre residence was built from brick, but the studio wanted to make sure it felt light, rather than imposing.

"Therefore all the brickwork and blockwork is very graphical and flat, more like a pattern," Somers explained.

The large bricks on the exterior have been painted black, while the interior brick walls are white. Only the bricks used for the terrace retain their natural russet hue.

Using different colours for the different spaces helped give the house a playful feel and a "weightless" appearance, according to the studio, which angled some of the brickwork to show off the contrasting hues. 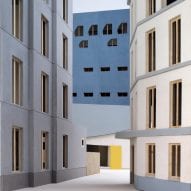 "Essentially the house is made of many of these patterns stitched together," Somers said.

"This also explains the 45-degree angles of the brickwork around the patio. Other 'patterns' beside the walls are the kitchen and bathroom tiles."

As well as the stepped interior, the architects used the unusual terrain to create the sheltered terrace that the team sees as a room in itself.

"The outside room exploits the south-facing orientation, without being too squeezed between the neighbours' hedge and the building itself," Somers said. "The patio turns the side of the house into an actual place with a specific intimacy."

Bovenbouw Architectuur was founded by Somers in 2011 and is based in Antwerp.

The studio has previously designed a fictional Flemish city for the Venice Architecture Biennale and transformed three 19th-century buildings on Antwerp's busiest street into a residential development.