Lukstudio has overhauled a formerly gaudy apartment interior in Guangzhou, China, to feature a series of serene living spaces lined in Douglas fir.

The apartment belongs to businessman Peter Fong, who previously collaborated with Lukstudio on the design of a nearby cafe-cum-co-working space. He brought the studio back on board to revamp the apartment he shares with his partner and young child.

Nicknamed Urban Cottage, the 180-square-metre home is almost entirely fit-out with pale Douglas fir wood, which stands in direct opposition to what is traditionally considered an upmarket interior in China.

"The apartment originally came with shiny marble and dark wood, a formula commonly recognized as 'luxurious' in the Chinese property market," explained Lukstudio.

"For Peter and Lukstudio, solid planks of Douglas fir define our vision of luxury, because its distinct colour, grain pattern and smell recall the memory of the countryside," the studio continued.

"For most busy urbanites, home is a temporary refuge and one would need the countryside for real rejuvenation."

The studio had to make a number of structural changes because the rooms in the apartment were awkwardly arranged around a dark dining space that had become nothing but a thoroughfare.

A new eating area has been created in a former study, which was opened up to reveal a window and flood the centre of the plan with natural light. The space also features a lengthy Douglas fir table and a cushioned bench built into the wall.

To keep the space free of bulky shelving units, the studio has constructed a double-sided storage wall in the home's entryway.

Here, the wall is inset with a duo of Douglas fir-lined display alcoves, as well as a seating nook where the client and his family can perch to remove their shoes.

Partitions around the kitchen were knocked down to create sight lines through to the living area, where the ceiling, floor and entire rear wall are wood panelled.

The room has been dressed with a cream-coloured sofa, peachy leather beanbag and white marble coffee table. 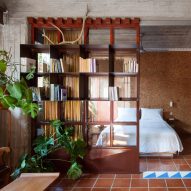 A wide panel of Douglas fir runs along the back of the main bedroom to form a headboard. The same wood has also been used to frame the room's deep-set bay windows, forming cosy niches where residents can read or relax during the day.

"While open spaces ensure the family having quality time together, nooks and crannies are just as important for each individual to feel at ease alone," the studio explained.

The material palette takes a detour in the en-suite, where surfaces have been clad in grey Ceppo marble while smart glass screens can switch from translucent to opaque, providing privacy when the room is in use.

Douglas fir reappears in the child's bedroom, lining a house-shaped recess that accommodates the bed.

Lukstudio was established by Christina Luk in 2012. Its Urban Cottage project is shortlisted in the apartment interior category of this year's Dezeen Awards.

Other projects in the running include Still Life House, a calming beachside duplex in Vancouver, and Toledano + Architects' Wood Ribbon flat in Paris, which features a sinuous plywood wall.