The trees would also use less water and are designed to grow fast and survive in turbulent weather conditions.

In Renna and Nenenko's imagined future, humans live in symbiosis with non-human species and are the "guardians of the forest". Plants are no longer considered "ornamental" but are vital to human survival and culture.

The concept is inspired by Ursula K Le Guin's 1972 novella of the same name, which is about a fictional planet that is completely covered by forest.

"In 1972, Ursula K Le Guin published the book The Word for World is Forest, a science-fiction novella in which a fictional planet is completely covered by a forest and inhabited by non-violent people capable of lucid dreaming.

"As in Le Guin's story, in our proposal for the Redesign the World competition, the forest and world are two meanings and one.

"We imagine the earth completely covered by a forest made with special genetically engineered trees – superorganisms able to grow faster and survive in extreme weather conditions using less water and absorbing 50 per cent more carbon dioxide than normal trees.

"In this new environment, humans live in symbiosis with the forest. They are the guardians. 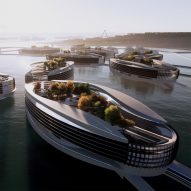 "The substance of their world is not earth but forest, within which humans and non-humans co-inhabit a common political space sharing life and death, dreams and myths.

"It is a place in which culture and nature blur in one entity, including all the forms of life and their thoughts.

"For too long, we (humans) have considered plants just like a cosmic ornament, inessential elements, pure decoration of our living places. Plants don't run and fly. They stay there where they are.

"The world for them is condensed in the portion of soil and sky they occupy in total communion with the surrounding environment. We will never be able to fully understand a plant without having understood what the world is."