Views of China's most sacred mountain take prominence in this hotel designed by Line+ Studio, which occupies a cluster of former homes in the city of Tai'an.

Shortlisted in the hotel interior category of this year's Dezeen Awards, the Cloud of Hometown Resort Hotel is nestled at the base of Mount Tai in the historic village of Dongximen.

In a bid to regenerate the Qing Dynasty village, which has been progressively abandoned as part of the country's rapid urbanisation, Line+ Studio (formerly known as Gad Line+ Studio) was brought on board to design an upscale hotel for the area.

The guest suites of the Cloud of Hometown Resort Hotel take over a sequence of old houses, arranged around courtyards filled with elm trees.

All of the residences' exterior walls have either been covered with concrete or replaced with sliding panels of glazing that provide unspoiled views of the landscape.

Terraces have also been constructed around the outside of the suites to let visitors further immerse themselves in the surrounding nature.

Each guest room features a cosy living room dressed with slate-grey soft furnishings, a kitchenette and a bedroom that faces directly onto nearby Mount Tai, which has been worshipped in traditional Chinese culture for the last three millennia.

Four dilapidated stone outbuildings in the southwest corner of the site have been linked together to form Cloud of Hometown's common areas, including the reception and a children's activity room with its own ball pit.

Line+ Studio installed a new glass ceiling above the central courtyard in hopes of "rendering the demarcation between inside and outside ambiguous" but otherwise preserved the pre-existing rubble walls.

A pothole that once blighted the floor here has also been transformed into a sunken, wood-lined seating area where guests can relax throughout the day.

Walnut-wood tables and rattan armchairs have been dotted throughout the space while a few earthenware vases hold twigs or dried flowers. 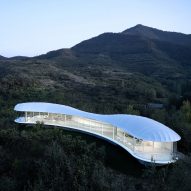 This restrained approach to decoration combined with the grey colour scheme is meant to imbue the rooms with a sense of serenity.

"The rural style was deliberately reserved during the production process, leaving some natural clumsiness in the space and making it real and pure," explained the studio.

"The renovated stone buildings with changing functions will always silently carry the memory of the village."

This is not the first time that Line+ Studio has worked on boosting Tai'an's appeal to travellers.

Last year, the practice was commissioned by the city's tourism board to create a new visitors centre, which resembles a "floating cloud" and features a curved, white-membrane roof.

Line+ Studio was founded by Meng Fanhao and Zhu Peidong in Hangzhou, and was named the emerging architecture studio of the year at the 2020 Dezeen Awards.

The Cloud of Hometown Resort Hotel will go head-to-head against four other projects in the hotel interior category of this year's awards. Among them is the Toggle Hotel in Tokyo, which features two-tone rooms and a facade painted in Pantone's colour of the year.

Photography is by Pan Jie.