Car brand BMW has blamed the lack of "framework conditions" in less developed parts of the world for its reluctance to replace fossil-fuel cars with electric vehicles.

The company refused to sign a multilateral deal presented at COP26 this week, which saw major automotive manufacturers including Mercedes-Benz, Volvo and Ford commit to selling only electric vehicles (EVs) by 2040, in a bid to limit global warming to 1.5 degrees Celcius.

BMW will not consider similar measures, said the company's head of sustainability strategy Thomas Becker, until countries like Italy, Romania and the Czech Republic have scaled up their EV-charging infrastructure.

"The job is done in the Netherlands and Norway, so these markets will be fully electric and we will only sell electric cars here," he told Dezeen.

"But we won't decide today that we are sure that the guys in Italy will do their job properly."

Currently, Norway and the Netherlands have around seven to nine public charging stations per 1,000 vehicles, compared to the 0.4 in Italy.

According to Becker, this comes down to a lack of "political leadership" from local and national governments.

"These guys just wait until somebody dumps money on them to get the job done," he said. "They won't do it."

"We should have binding targets, which ensure that also the poorer countries do their job," Becker said, adding that this should be coupled with financial support from the EU's €800 billion coronavirus recovery fund.

Every second BMW to be electric by 2030

The BMW Group is set to fully electrify its subsidiary brands Rolls-Royce and MINI by 2030, as these are "predominantly sold in industrialised countries" and driven at shorter ranges.

The targets for BMW's own brand are more modest, with every second vehicle sold in 2030 expected to be fully electric.

That's because the make is sold in a broader range of markets and is often used by professional drivers at long distances, which Becker said means customers would be less willing to switch to an EV.

"We are not in the business of objective needs," he explained. "This is about choice."

"We won't say: we don't believe in the possibility of fully electrifying the BMW," he continued.

"What we're saying is: in order for that to happen, we need framework conditions we can't create ourselves, which we are not sufficiently certain about at this point in time." 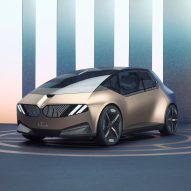 If all new cars had to be electric, even in areas without the necessary infrastructure, Becker argued this would have the adverse effect of pushing customers to buy used combustion-engine vehicles, which are more polluting and less efficient than their modern counterparts.

"Nobody will ban all the vehicles that exist, which on average in Europe were built 11 years ago," he said.

"So it's still better they get a good conventional vehicle, for example in Southern Italy, than driving a used one."

This should go hand in hand with rethinking road and parking-lot pricing according to emission classes as in London's Ultra Low Emission Zone (ULEZ), Becker argued, to encourage drivers to switch to more efficient vehicles or opt for public transport instead.

Only one of the five biggest automakers (Toyota, Volkswagen, Daimler, Ford and Honda) and none of the five largest car markets have signed on to the COP26 deal to phase out the combustion engine.

But even without the lack of key signatories, Greenpeace has argued the "scale of ambition in the deal itself was disappointingly weak" and falls "far short" of the measures needed to stay below the crucial 1.5-degree threshold.

Worldwide sales of new fossil-fuel cars would need to cease by 2035 to hit this target, according to data by the International Energy Agency, while biofuel production would need to rise at a pace that is "impossible to achieve sustainably".

"What's gravely concerning today is that major economies like the US, Germany, China, Japan and manufacturers like VW, Toyota and Hyundai could not even bring themselves to sign a declaration on electric vehicles that promises less than what's actually required to maintain climate security," said Martin Kaiser, executive director of Greenpeace Germany.

Swedish manufacturer Volvo was one of only 11 global carmakers to sign onto the COP26 deal, after announcing earlier this year that it would be moving ahead of schedule to phase out the internal combustion engine by the end of the decade, while its subsidiary Polestar is aiming to produce a climate-neutral car by 2030.