Audio effects by the Oscar-winning composer, whose movie scores include Inception and The Lion King, will include an electronic interpretation of the sound of wind rushing over the car.

"It's like when you're sailing and you hear the wind in the sails," said BMW head of design Domagoj Dukec in a live Dezeen talk earlier this week.

"It doesn't recreate the sound of the engine. It's really a completely new symphony."

The sounds, which will respond to the driver's actions as well as the car's performance and external conditions, will be played through 24 speakers inside the vehicle.

Some of the speakers will be embedded into the diver's seat to create an even more immersive experience.

"It's more like you can almost compose the music with the way you drive," Dukec explained. "It's like you create your own music."

The soundscapes will be included in the iX SAV as well as the i4 Gran Coupe, which are both due to be launched this autumn.

"Design so far has been quite superficial. It was just seen from a visual point of view," Dukec added.

"But human beings, they have many more senses – five senses – and seeing is just 20 per cent. If you want to really create this joy of an experience, you have to somehow address more than just one sense."

"It opens up a completely new horizon"

BMW has been working with Zimmer since 2019 to create a library of bespoke sounds for its growing range of electric vehicles.

Zimmer is known for crafting instantly-recognisable scores such as the Pirates of the Caribbean theme.

His longstanding collaboration with director Christopher Nolan has seen him create the music for the Dark Knight trilogy, Interstellar and a host of other blockbuster films.

Zimmer's sound design for the iX includes an audio interpretation of air passing over the body of the car. The sound and volume of this will change according to the speed of the vehicle.

This will be combined with a unique composition created by Zimmer that responds to the car's three driving modes: core, sport and efficient.

"We have different modes, so you have different experiences," said Dukec. "Suddenly you are not just connected to the functional sound of your engine; you can create something completely free. It opens up a completely new horizon."

Although BMW has not yet released specifics about the sound of the iX, a teaser video for the i4 features a futuristic zooming noise not dissimilar to some of the experimental compositions that Zimmer has previously created for movies such as Interstellar and Inception.

Since the composer started his collaboration with BMW in 2019, he has also worked with the company's acoustic engineer Renzo Vitale to create a soundscape for its Vision M Next concept car, which is informed by light installations by James Turrell and Olafur Eliasson.

"We are not designing cars any more in the future"

Dukec spoke to Dezeen as part of a live-streamed interview, in which he discussed the upcoming launch of the iX and revealed the inner workings of BMW's design department.

Before being named the head of BMW Design in April 2019, he was a chief designer at the company for nine years, most recently working on the design of BMW's electric i models and performance M range.

The collaboration with Zimmer is part of a recent broadening of BMW's design strategy towards creating a more user-centred experience besides focussing on performance and technology.

"We are not designing cars any more in the future," he said. "For us, it's very important that we are designing the experience of joy."

In the iX this manifests itself in a greater focus on the interior of the car, Dukec said, which is designed to resemble a home or luxury hotel room.

"The exterior should express a shell protecting this very precious interior space of the iX, which we believe is a very new approach in the car industry," he explained.

In line with this philosophy, the car's high-tech features are strategically concealed throughout the interior to create a clean, pared-back look.

"A luxury product must be sustainable in the future."

Sales of sports activity vehicles and SUVs have boomed recently and are the second largest cause of increased carbon dioxide emissions over the last decade, according to a recent report.

Dukec said that sales had grown "enormously" during the pandemic as people switched from public transport to private vehicles.

The BMW iX offers a way to meet people's needs in a sustainable way, he claimed, while proving that a bigger car doesn't always have to be worse for the environment.

"A small apartment in Paris, which is old, is maybe less sustainable than a 500-square-metre villa, which is under new requirements very efficiently designed," Dukec explained. 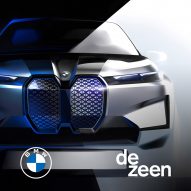 Beyond using two electric motors, the materials specified throughout the iX were chosen to minimise the car's environmental impact, he said.

This includes the lightweight carbon-fibre shell, the recycled textile floor matt and a console made from responsibly-sourced wood. The traditional leather upholstery is replaced with micro fabrics.

Going forward, Dukec said, his ambition is to create a car that follows the principles of the circular economy. "BMW is convinced that we have to achieve something like this," he said.

"A luxury product must be sustainable in the future. And we believe that this is inevitable."