Day 11 of the Dezeen 15 digital festival featured a video interview with museum director Aric Chen, who suggests that the process of writing manifestos is a distraction from solving the world's problems.

"Manifestos are, frankly, part of how we got into the mess that we're in," he states in his own manifesto written for Dezeen.

"They are inherently one-dimensional and are often exclusionary and divisive, their conceit of a unifying logic resulting most frequently in empty platitudes at best and totalitarian visions at worst."

Instead, he says, it is time to "put words into action, without fear of failure". 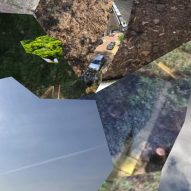 Aric Chen calls for "the death of manifestos"

While calling for the death of manifestos, Chen also introduces Zoöp – a framework for bringing non-human interests into an organisation's decision-making process, created by Het Nieuwe Instituut in Rotterdam, where he is general and artistic director.

Chen previously served as professor and founding director of the Curatorial Lab at the College of Design & Innovation at Tongji University in Shanghai and was also the first curatorial director of the Design Miami fairs.

The Dezeen 15 festival features 15 manifestos presenting ideas that could change the world over the next 15 years. All contributors will also take part in a live video interview.

The portrait of Chen is by Yoha Jin.