A disused power plant and its neglected surroundings in Shenzhen, China, have been transformed into a wetland park masterplanned by Hong Kong-based landscape studio eLandscript.

Haoxiang Lake Park, which has been shortlisted in the landscape project category of Dezeen Awards 2021, combines the ecological management of a stormwater retention pond with a new bridge, pedestrian walkways, an exhibition hall and a cafe.

Located in the Shajing neighbourhood, the park will act as the venue for the Oyster Culture Festival, celebrating the historic importance of oysters to the culture and customs of the area.

"An 850-metre pedestrian loop reconnects the riverside spaces, and collides with the site in different areas to create landscape anchor points, such as the Rainbow Bridge, Sluice Overlook and the Flora Trellis Café," explained the studio.

eLandscript collaborated with various practices for the plan's different elements, which connect several banks created by the four rivers that feed into the lake with series of paths and elevated promenades.

The Rainbow Bridge, which crosses two rivers to the north of the site, was completed by German practice Schlaich Bergermann Partner. Its sweeping, 238-metre long form is created using steel box girders.

The Flora Trellis Cafe to the south of the site was designed by LAAB Architects, and features glass curtain walls sheltered by a white rhombus-coffered canopy.

ARCity were the collaborators for the regeneration of the former power plant, which has become the Oyster Culture Centre, including the creation of an adjacent play area, the Oyster Shell Water Maze, and a nearby educational wetland. 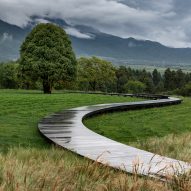 Z'scape designs Hylla Alpine Garden as a "place of comfort, solitude and peace"

The ruins of the power plant's original 1980s structure has been retained left exposed, with new steel and glass forms inserted to enable the space to be used for local activities and exhibitions.

"These flexible regeneration methods bring positive environmental impacts, solve the growing community's demand for open space and the social problems brought about by the rapid development of the city," said the practice.

After carrying out flooding analysis, a 600-metre revetment retaining wall surrounding the lake has been transformed into a planted gabion wall, topped with reeds to create new banks that can be safely submerged during flooding.

At the park's entrance to the south, a traditional oyster-shell wall technique has been used to define the boundary of the site where it meeds the road, alongside a paved plaza leading towards the café.

Increasingly, urban wetlands projects are being considered as a means to combat more regular flooding as a result of climate change.

In New Orleans, Waggonner & Ball recently revealed plans for a 25-acre wetland park on the site of a former convent, which will be able to naturally absorb and store some 6.5 million gallons of water.

Other projects shortlisted in the landscape project category of Dezeen Awards 2021 include an alpine garden designed by Z'scape with meandering wooden paths and ancient trees.

Qidi Design Group were also shortlisted for its landscaped garden with curving paths and bridges.

The photography is by Tianpei Zeng.