Called Drawing Fields, the project was a set of site-specific, 1:1 scale drawings created by GPS-controlled robots that produced what the project's architects called "an unconventional stage."

The installation was located at Ragdale, the former summerhouse of the late architect Howard Van Doren Shaw, in Illinois, and was the winning entry of the 2020 Ragdale Ring competition – an annual residency in which an architect builds a temporary performance venue at Ragdale's grounds.

Drawing Fields was designed to respond to the competition's theme of mobility.

"The design of each pattern took into account the unique perspectives possible through aerial photography and explored tactics of measurement, calibration, and control across the landscape," Outpost Office co-founders Ashley Bigham and Erik Herrmann told Dezeen.

During the period in which the installation was exhibited at Ragdale, the space was used for various performances. Each field drawing took two days for the robot to install, and disappeared after two to three weeks.

"They were very ephemeral," acknowledged Bigham and Herrmann. "There were no disposal costs or waste. Each drawing disappeared with rain, sun and growth. Within a few weeks, the site returned to its original state." 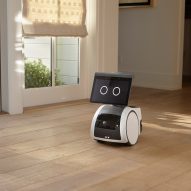 "Essentially, this code is a long list of coordinates that direct the robot's movements and instructs it when and where to paint," said the designers.

"Once loaded into the robot, the G-code allows the robot to run semi-autonomously," they continued.

Outpost Office placed a base station with a GPS receiver at Ragdale, which was connected to a network of satellites and communicated with the robot via an antenna.

"The robot is extremely accurate, but obstructions like tree foilage and adjacent buildings can cause signal masking," added Bigham and Herrmann. "In cases of signal masking, the robot will become 'lost' and must be reconnected."

Constrained by coronavirus limits, Outpost Office aimed to create a project that could be installed by a team of only two, which was then documented by drone video and streamed online.

"The project was inspired by the challenges facing the Ragdale Foundation at the onset of the pandemic," explained Bigham and Herrmann, referring to the organisation that runs the Ragdale Ring.

"With the organisation suddenly unable to open its grounds to the public, two related design challenges emerged for the annual Ragdale programme: how to fabricate on a restricted site and how to engage a radically distributed audience."

Drawing Fields has been shortlisted for this year's Dezeen Awards in the installation design category.

Another project that is nominated for the award is Chila Kumari Burman's Brave New World, a technicolour neon installation adorning the Tate Britain museum.