Iragüen Viñuela Arquitectos has reused the foundations of a previous building project for this holiday home in Chile, which can accommodate up to 12 guests.

The two-storey cabin is located by the Cautín River and was commissioned by a client to enjoy winter sports with his family at the nearby resort Corralco, which is famed for its long snow season.

After the client parted ways with another architect and contractor that left only the building's foundations completed, Iragüen Viñuela Arquitectos – a Santiago-based studio led by Daniel Iragüen Contreras and Claudio Viñuela Schweitzer – was tasked with completing the job before the start of the following winter.

The existing foundation, on a bend in the river, was an ideal location for the home.

"The platform had been built in a small clearing in the forest, without cutting any trees, right at the tip of the peninsula, which allowed it to be surrounded by the river, with spectacular views towards the forest and up the hillside," the architects explained.

On the ground floor, a central open space forms the heart of the home, where the owners and their guests meet for meals and relaxing. Two bedrooms occupy either end of this level.

"We arranged the ground-floor program to make the most of the views, contemplating a cross-shaped layout with views at its ends towards the four cardinal points," the architects explained.

"In this way, the corridor on the east-west axis leads to openings at either end, while the open central space is facing direct sunlight from the north and views of the river to the south." 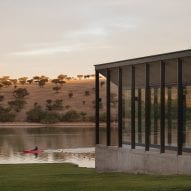 Upstairs, the architects included four bunk beds that can accommodate up to eight children. The open area between the beds is large enough to form a secondary play area away from the main living room.

The home also enjoys a variety of outdoor spaces. New patios were built off-axis from the main building, creating platforms for a swimming pool and hot tub surrounded by the thick forest.

On the north side of the home, an exterior space with a grill connects to the living and dining space through full-height, sliding glass doors, allowing the residents to cook outdoors easily.

Iragüen Viñuela Arquitectos chose a simple wooden palette for the home. Its exterior boards were directly influenced by surrounding agricultural buildings. Inside, dark-stained wood lends the home a muted and tranquil ambiance.

"A skin of wooden planks worn by the sun covers the main facades, borrowing from the way in which the cattle sheds in the area are lined and the grey tone of the tree bark," said Iragüen Viñuela Arquitectos.

"The interior of the house completely covered in black wood allows a great contrast with the white winter and green summer landscape, and offers an atmosphere of introspection and calm according to the vocation of shelter."

Other residences in Chile include a home on the island of Chiloé by Edward Rojas Arquitectos that draws cues from timber construction traditions tracing back to Jesuit colonisation, and a low-slung home outside Santiago with hidden courtyards that help define the interiors.

The photography is by Marcos Zegers.