Architecture studio Sher Maker used salvaged and standard construction materials to build its own workspace in Chiang Mai, Thailand, which it arranged along either side of an open-air courtyard.

Sher Maker set out to create a studio space which embodies its values as a small-scale office that enjoys experimenting with the architectural design and construction of buildings using local resources.

"Sher Maker is an architectural design studio with an interest in the process and meaning behind architecture methodology," said the studio, which is shortlisted in the small workspace category of Dezeen Awards 2021.

"We are interested in the origins of architectural formations which depend on the context of local technology and materials," the architects added. "We are also interested in the design of the atmosphere that affects the building in both physical and ambiance."

The studio building occupies a previously vacant lot on the edge of a lake close to Chiang Mai International Airport. The site is nestled in a forest and lined with acacia trees that the architects wanted to preserve wherever possible.

The studio is divided into two floors that accommodate offices and workshop facilities, including areas for material testing and furniture making.

The building's simple structure utilises old timber and steel frames, while the floor is made from bricks from a nearby kiln, along with construction gravel to help reduce costs. The architects stated that the total cost for the project was approximately £15,000.

The two-storey structure is topped with a corrugated metal roof that extends almost to ground level. The metal sheet is punctured by openings that allow existing trees to continue growing through it.

The exaggerated gable roof conceals the internal spaces and focuses views towards the central courtyard, which contains breakout areas with communal seating and a pingpong table.

An office space on one side of the ground floor is lined with glazing and doors that open to allow cooling breezes to reach the interior. On the opposite side of the courtyard, the sloping eaves shelter a workshop and storage area. 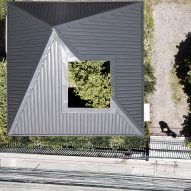 According to Sher Maker, the building's design evolved in response to the available resources and labour as it was designed and built.

"During the design and construction of this building we had no idea of the exact language or shape of the architecture that was being formed," the architects explained.

"It was a building that was built with many limitations and also full of pitfalls, but when it was completed and in use for almost a year it became a real part of our daily lives."

Sher Maker was established by Patcharada Inplang and Thongchai Chansamak, who work with a team of builders and crafts specialists to develop projects that explore the possibilities enabled by local materials and technologies.

The Sher Maker Studio features on the small workspace shortlist for Dezeen Awards 2021 alongside projects including a renovated barn for an artist in Devon, England, and an office interior in Amsterdam featuring cave-like spaces surrounded by rippling laser-cut curtains.