Colourful shipping containers and a modular steel structure make up Stadium 974, which Fenwick Iribarren Architects has completed in Qatar ahead of the FIFA 2022 World Cup.

Its modular structure combines repurposed shipping containers and a steel structure, parts of which are recycled.

The aim is for the stadium to be dismantled and reassembled in a new location after the football tournament in 2022, or repurposed as a series of smaller venues.

Its modular design also reduced constructions costs, build time and material waste, and organisers said water efficiency methods ensure it will reduce water use by 40 per cent compared to a conventional stadium development.

Stadium 974 is named after the number of shipping containers used for its construction. The number 974 is also the country's international dialling code.

The shipping containers, many of which were used to transport construction materials to the venue, serve as a nod to Qatar's maritime history and the industrial heritage of the site.

While forming portions of the stadium's exterior, some of these steel containers contain staircases, concession stands and bathrooms.

According to the Supreme Committee for the FIFA World Cup Qatar 2022 (SC), Stadium 974 has been designed by Fenwick Iribarren Architects to achieve the five-star certification in the Global Sustainability Assessment System (GSAS) for both its construction and design. 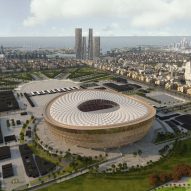 GSAS rates green building and infrastructure across the Middle East and North Africa. Certification is available for the design, construction and operations of a structure, with six stars being the highest achievable rating.

The shape of the stadium and gaps between the seats facilitate natural ventilation, meaning artificial cooling is not required. This is helped by the stadium's proximity to the sea.

The SC hopes also hopes the project will serve as "an innovative blueprint" for more sustainable stadium designs for future largescale events.

"The striking Stadium 974 is a proud symbol of sustainability and innovation," said SC chairman and engineer Yasir Al Jamal.

The stadium will host its first match on 30 November. Other recently completed stadiums for the tournament include the Al Thumama Stadium by Ibrahim M Jaidah and the Education City Stadium that Fenwick Iribarren Architects also designed.

Stadium 974 is the only stadium positioned close to the sea and will also be the first stadium that football fans will see upon arriving in Qatar for the tournament, due to its proximity to Hamad International Airport.

Elsewhere, recent architecture projects that have made use of repurposed shipping containers include a housing complex for the homeless in LA and a black holiday house in New York.

Other reversible buildings featured on Dezeen include Triodos Bank, a timber-framed office nestled in Dutch woodland, and the egg-shaped Tij Observatory in the Netherlands.