British artist Stuart Semple has unveiled the "whitest white paint" in his latest quest to produce the most pigmented versions of colours for painting.

Having already laid claims to the world's pinkest pink and the blackest black, Semple has now developed what he claims to be the whitest white paint available for artists.

White 2.0 is made from a specially developed acrylic base, high-quality pigments, resins, optical brighteners and mattifiers, which allow it to reflect 99.98 per cent of light and make it dazzlingly bright. According to Semple, White 2.0 is 50 per cent brighter than the bestselling white paint.

"It really is the brightest white paint I've ever seen, and I couldn’t believe it when the lab results came back to say it was 50 per cent brighter than any other," Semple told Dezeen.

White 2.0 builds on a "beta version" of the white paint, which Semple created as a prototype with his team of scientists a few years ago, following varied research.

"We drew inspiration from the ghost beetle, but we also looked at luminescence in plants and natural whites that reflect light across the whole visible spectrum," he said.

"We looked at surfaces that diffused light, not just from nature but human-made materials like the barium paints that were used as early as the 15th century by the likes of artists like Caravaggio."

During the coronavirus lockdown, Semple then enlisted the help of 2,000 artists to trial three versions of the material while painting at home. The artists were asked to fill out a questionnaire about the paint after use.

This enabled him to understand exactly what users were looking for while working with the paint.

"Then we set about making a hybrid of all the features we knew it needed, which took a further couple of years and was a huge process of testing and trial and error," he recalled. 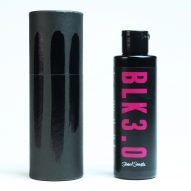 Black 3.0 is a "black hole in a bottle" that challenges Anish Kapoor's Vantablack pigment

The final version of the paint has been made using instant recoat technology, which means that it doesn't require multiple layers to achieve the desired opaque effect, even when applied to more challenging surfaces.

It can be applied with a brush, spray it onto a variety of materials including paper, wood, metal and glass.

"One of the most powerful qualities of White 2.0 is its incredible opacity, removing the need for layers and layers of paint upon darker surfaces," explained Semple.

Although an extremely white paint by Purdue University is already available for industrial purposes, Semple hopes that his paint – which costs £19.99 – will be used by anyone regardless of their artistic capabilities.

Semple has made headlines over the last five years during his battle to develop the blackest black in the world. In 2019, he produced Black 3.0, a black paint that rivals sculptor Anish Kapoor's Vantablack.

Prior to that, he released a cherry-scented version of the black pigment which can be purchased by anyone apart from Kapoor.