Students at the University of Southern California's School of Architecture have designed and built a complex bridge in Los Angeles using a semi-robotic process that slashed construction waste.

It is designed as an intricate web of steel tubing, with a layered structure inspired by leaf veins and tree branches.

The bridge's structure was the result of a challenge that saw 13 undergraduate students tasked with designing a pedestrian bridge using parametric design tools.

While the design was initially hypothetical, it had to suit a specific site across a Los Angeles canyon, providing access to treetop views on either side.

The complex geometry meant the design would be nearly impossible to build with traditional manual manufacturing methods.

Working with the Martin Architecture and Design Workshop (Madworkshop) and engineering software company Autodesk, the group began investigating how it could be done using robotic assistance.

"While the final steel design was feasible, the geometric complexity and asymmetry would have required impractical amounts of fixturing to hold structural members in position prior to welding," Mitchell told Dezeen.

"In the weeks following the studio I began thinking about the prospect of placing and holding structural members with little or no fixturing. An industrial robotic arm proved to be the best, if not only, solution," he continued.

The process the group developed had human welders working with industrial robot arms that held the parts in the position required. The robots could achieve far more precise positioning than using supporting formwork.

This kind of process is known as collaborative robotics because rather than replacing workers with automation, it has the two working together on the same task.

"Early on we realised that the robots are far more accurate than the physical world," said Mitchell. "The imprecision of the most basic materials could throw off a day of work."

"Using these methods we were able to hold under one millimetre of tolerance on the robotically positioned nodes, far under the engineers' maximum allowance of six millimetres." 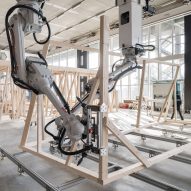 Working this way, they welded 600 parts made from A500 tube steel and A572 plate steel into 30 sections. These were then fixed together on site.

The robots effectively eliminated the need for formwork in the welding process, cutting down on the usual material waste.

Scrap steel was also kept to a minimum by precision pre-cutting the structural elements using multi-axis tube laser and waterjet cutting machines. In total, the project generated less than 500 kilograms of construction waste, all of which was recycled.

Mitchell says that while the project could have been executed using traditional fixtures and fabrication techniques, it would have been far more expensive and wasteful, and far less accurate.

"The construction framework would have likely cost more than the bridge itself, only to be scrapped or recycled upon completion," he told Dezeen.

"I would estimate the total at two to three tonnes, at least half of which would have been directed to a landfill."

Collaborative robotics combines the precision of robotics with human creativity and adaptability.

"Any sort of automated system is often really brittle," said Autodesk Research Robotics Lab principle research scientist Heather Kerrick. "As soon as anything is out of whack or unexpected the entire system can break down."

"What industry has often done to respond to that is to try to reduce any source of chaos," she continued. "What this project does instead is allows for that chaos and then leans on humans to help adapt and take that chaos in stride."

The Arroyo Bridge took six years to go from design to completion. Its steel structure is finished with a reddish brown long-life coating that complements the surrounding plant life.

A previous USC course, also led by Madworkshop and Mitchell, had students design shelters for LA's homeless population, with projects including a shopping cart converted into a tent structure and a tiny house made of scavenged material.