Design office Made Thought is teaming up with Universal Design Studio and Map Project Office to form a new design collective, after selling a majority share to digital agency AKQA.

AKQA now owns a controlling interest in all three London-based studios, having bought a majority stake in interiors office Universal and industrial design office Map Project Office back in 2018.

Its latest acquisition, Made Thought, is a leading design branding studio founded by Paul Austin and Ben Parker.

The move allows the three studios to come together to form The New Standard, a collective with the ambition to "redefine the contemporary design agency".

All three companies will remain as distinct entities, but will come together on projects that span different design fields.

To allow effective collaboration, Made Thought will move into the Universal and Map office in London's Clerkenwell.

"Universal, Map and Made Thought are pioneers and innovators with an unmatched track record for design excellence, influential and distinguished work," said Ajaz Ahmed, CEO of AKQA.

"This partnership represents the next wave and set The New Standard. It is founded on the beliefs that form and substance are inseparable, and creativity is both revealed and enhanced in an atmosphere of collaboration."

Ushering in "new age of design"

Austin and Parker will stay on as principal directors of Made Thought, whose clients include Stella McCartney, Tom Dixon, Adidas, MoMA, Sonos and & Other Stories.

The studio specialises in projects that look to the future of design. Recent examples include branding for the world's first plastic-free supermarket aisle and a pop-up that merged elements of the physical and digital retail experience.

The New Standard is borne out of the shared belief that "design will play a pivotal role in our imminent futures", in the context of significant global events like the Covid-19 pandemic and the climate crisis.

"Creativity is the most important currency for business in the 21st Century and we believe collaboration is the key to bigger, bolder thinking," said Austin and Parker.

"For us, the coming together with Universal, Map, alongside AKQA, is the best way to see in this new age of design."

This will be the second time that Made Thought has come together with industrial designers Edward Barber and Jay Osgerby, who are the founders of both Universal and Map.

Made Thought and Universal shared a studio 20 years ago, when Universal was known as Barber Osgerby Associates.

The three studios intend to collaborate "in a collegiate manner", with a focus on experimentation and cross-platform work. 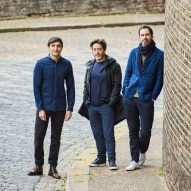 Their efforts will be supported by AKQA, which has a global team based in 50 different countries around the work.

Richard Stevens and Jason Holley, principals of Universal and Map, said they plans to use "the power of our collective to remain at the forefront of creative transformation, always challenging the status quo".

"The New Standard will encourage the creative talents of each studio to flourish, whilst nurturing ideas at all scales and across all disciplines," they said.

More Made Thought, Universal and Map